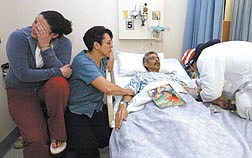 Vic Clementi, center, gets his blood drawn by Carson-Tahoe Hospital lab assistant Daron Overturf on Thursday afternoon as his wife Kim and daughter Ginny, 15, await word on his treatment.