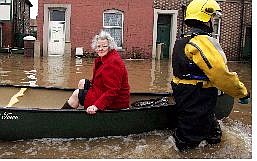 Associated Press An elderly resident is rescued by firefighters from floodwaters on Warwick Street in Carlisle, England, Sunday. Powerful winds and heavy rain swept across northern Europe overnight from Britain to Russia.