Legislative session is over 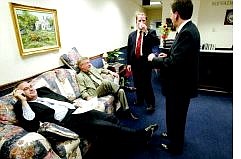 Cathleen Allison/Nevada Appeal From left, Nevada lobbyists Greg Ferraro and Fred Hillerby talk with Chief of Staff Mike Hillerby and state Treasurer Brian Krolicki just before midnight Monday at the Legislature. State lawmakers missed a 1 a.m. deadline Tuesday to finish the legislative session, but were able to conclude it after a 10-hour special session.