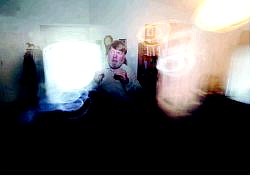 BRAD HORN/Nevada Appeal Richard Senate talks about ghosts in his Indian Hills home on Sunday afternoon. The lighting effects were created by shooting in the bulb setting and twisting the camera in circles while the shutter is held open.