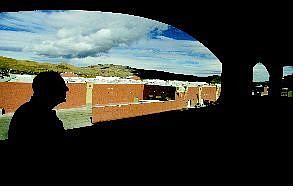 BRAD HORN/Nevada Appeal John Whaley says his normal nights of eight hours of sleep have been cut to three to six hours because of noisy trucks, refrigeration units and bright lights from the new Wal-Mart Supercenter in north Carson City.