Big city got you down? Stress study shows why 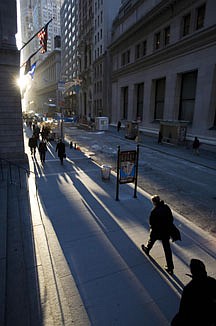 FILE - In this Dec. 22, 2008 file photo, people walk to work on Wall Street in New York. It may come as no surprise to residents of big cities: Living there can be bad for your mental health. Using imaging scans, researchers have found that in city dwellers or people who grew up in urban areas, certain areas of the brain react more vigorously to stress. (AP Photo/Mark Lennihan, File)