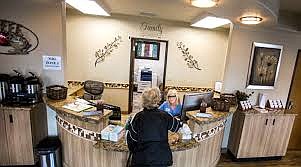 A receptionist checks in a patient at A+ TotalCare in Elko on Wednesday, April 4, 2018.