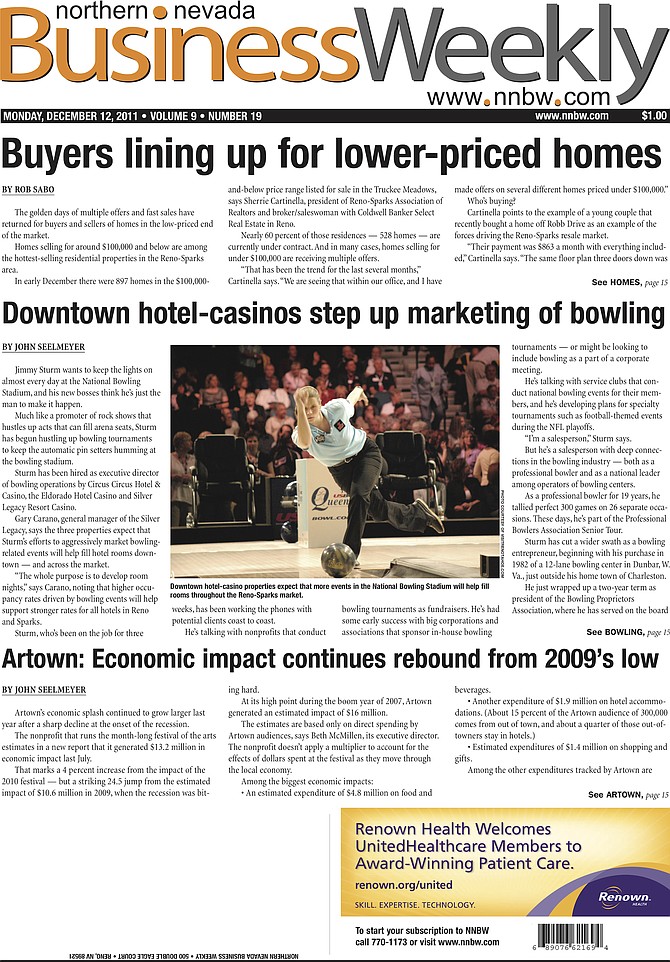 Buyers lining up for lower-priced homes

The golden days of multiple offers and fast sales have returned for buyers and sellers of homes in the low-priced end of the market. Homes selling for around $100,000 and below are among the hottest-selling residential properties in the Reno-Sparks area.

In early December, there were 897 homes in the $100,000- and-below price range listed for sale in the Truckee Meadows, says Sherrie Cartinella, president of Reno-Sparks Association of Realtors and broker/saleswoman with Coldwell Banker Select Real Estate in Reno.

Nearly 60 percent of those residences — 528 homes — are under contract. And in many cases, homes selling for under $100,000 are receiving multiple offers.

“That has been the trend for the last several months,” Cartinella says. “We are seeing that within our office, and I have made offers on several different homes priced under $100,000.”

Jimmy Sturm wants to keep the lights on almost every day at the National Bowling Stadium, and his new bosses think he’s just the man to make it happen. Much like a promoter of rock shows who hustles up acts that can fill arena seats, Sturm has begun hustling up bowling tournaments to keep the automatic pin setters humming at the bowling stadium.

“The whole purpose is to develop room nights,” says Carano, noting that higher occupancy rates driven by bowling events will help support stronger rates for all hotels in Reno-Sparks.

Artown’s economic splash continued to grow larger last year after a sharp decline at the onset of the recession.

The nonprofit that runs the month-long festival of the arts estimates in a new report it generated $13.2 million in economic impact last July. That marks a 4 percent increase from the impact of the 2010 festival — but a striking 24.5 percent jump from the estimated impact of $10.6 million in 2009, when the recession was biting hard.

At its high point during the boom year of 2007, Artown generated an estimated impact of $16 million.

The estimates are based only on direct spending by Artown audiences, says Beth McMillen, its executive director. The nonprofit doesn’t apply a multiplier to account for the effects of dollars spent at the festival as they move through the local economy.