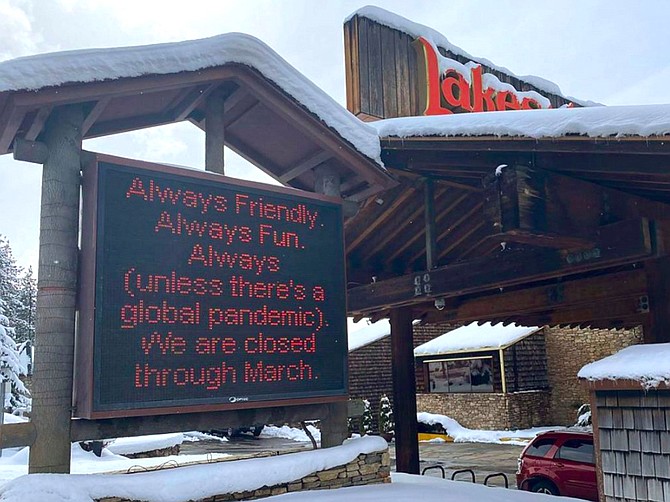 Lakeside Inn and Casino in Stateline, on Lake Tahoe's South Shore, which initially temporarily closed at the onset of the pandemic last March, closed permanently in April. Courtesy Photo

As Nevada grappled with the effects of the pandemic, the gaming industry’s revenue dropped to $18.3 billion in the 2020 fiscal year, down 25.2 percent from $24.5 billion in the previous year, according to a new report from the Gaming Control Board.

The 179-page Nevada Gaming Abstract, which was released Jan. 22, included data on the revenue made from gaming, rooms, food and beverage, and other sources by the 267 casinos that earned more than $1 million in gaming revenue during the fiscal year ending in June 2020.

The number of businesses represented in the 2020 report — 267 licensees — marked a decline from the 290 included in the previous year’s report.

“The 2020 Nevada Gaming Abstract reinforces what we’ve known all along — that Nevada’s economic engine and largest taxpayer and employment sector has been devastated by the continuing impacts of the pandemic,” said Virginia Valentine, president of the Nevada Resort Association, in a statement provided to The Nevada Independent.

With statewide revenue down $6.2 billion from the previous year, the gaming industry also significantly cut expenses.

Across all categories listed, payroll costs in the 2020 fiscal year decreased by approximately $215 million over the previous year. The decrease in payroll was matched by a significant loss in jobs during that same period, as the average number of employees in all departments dropped from 162,066 to 135,926.

A lightened payroll also brought the statewide general and administrative expenses down from $10.1 billion in the 2019 fiscal year to just $5.5 billion the following year.
With expenses down significantly, the industry’s profit as a whole increased from $2.1 billion to $2.9 billion year over year.

Michael Lawton, a senior research analyst for the Gaming Control Board, said in an email that the increase in profit also came because of several large real estate sales recorded in the Las Vegas Strip area.

The revenue from those sales, including the sale of the MGM Grand and Mandalay Bay properties by MGM Resorts International to the Blackstone Group Inc. in a $4.6 billion deal, helped counteract the significant losses in gaming revenue.

The report also showed the significant effect that the pandemic shutdown had on the revenue made from rooms. In April 2020, only 2.4 percent of available rooms were filled at the casinos in the report, a massive drop from April 2019, when 87.2 percent of rooms were filled. With far fewer rooms occupied during the second quarter of 2020, the revenue from rooms dropped by 26.8 percent from the 2019 to 2020 fiscal year.

The casinos on the Las Vegas Strip were more affected than casinos in any other part of the state, as they had the largest decrease in revenue by percent from the 2019 to 2020 fiscal year, dropping 26.7 percent.

However, with extra money coming in from real estate transactions, the Las Vegas Strip was also the area with the largest percentage increase in profit, with an increase of 162.1 percent compared to the previous year.

Even as other areas remained profitable, the gaming industry in the rest of the state fared much worse, as casinos in downtown Las Vegas, Laughlin, Washoe County and Elko County all saw significant drops in profit from the 2019 to 2020 fiscal year.

The pandemic has affected the current fiscal year in a variety of ways, from the cancellation of events to capacity limits at venues to reduced travel. The next annual financial report on the gaming industry could paint a similar picture of decreased gaming revenues and low room occupancy rates.

But some are hopeful that a desire for travel and entertainment will help with the industry’s recovery this year.

At “Preview Las Vegas 2021,” held in early January, CEO of the Las Vegas Convention and Visitors Authority Steve Hill said he thinks people will likely feel more comfortable with traveling by the second quarter of 2021.

Valentine also noted the importance of the COVID-19 vaccine rollout.

“A critical component of our recovery depends on the distribution and acceptance of the vaccine,” Valentine said. “The sooner hospitality employees, which represent roughly one in every four Nevada jobs, can be vaccinated, the swifter we can restore our tourism-based economy, welcome back large events and trade shows, reopen dormant businesses and bring more Nevadans back to work.”