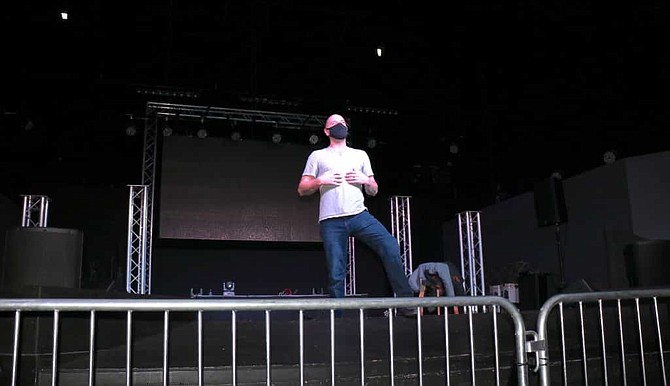 Brandon Deriso stands on the empty stage in mid-January inside the Virginia Street Brewhouse as he talks about bringing a new form of entertainment to the venue starting this month: live podcasts. Photo by Kaleb Roedel.

It’s a Thursday afternoon in mid-January and Reno business owner Brandon Deriso is standing in front of an empty stage inside the Virginia Street Brewhouse. The bar and concert venue, tucked on Virginia Street in the heart of downtown Reno, is dead quiet.

Not for long. Deriso has some things to get off his chest.

“Take a look at the stage here,” says Deriso, pointing at the platform a few strides away. “We’re set up, by nature, with a 9-foot-in-diameter easement between the audience and the band. If anybody had talked to us first when the pandemic hit, either casinos or entertainment people, and asked, ‘how do we navigate this?’ We would’ve told you, first of all, we’re safe at concerts; we’re going to reduce capacities; we’re going to just push it all down.”

Still, the live concert industry has been on pause since mid-March in Nevada — and pretty much across the U.S. — because of the coronavirus pandemic.

“What they did instead is come in and went … whack!” says a frustrated Deriso, swinging his arm forward as if clearing chess pieces from a board, referencing state government shutdown orders due to the pandemic. “And then they’re like, ‘we have a huge unemployment rate!’ Well, you just put 40,000 people out of work.”

SWITCHING GEARS
Around this time a year ago, Deriso, who contracts with the Virginia Street Brewhouse to book events there, would have been thinking about the next touring band to take the brewhouse stage and perform for a packed crowd.

Instead, with the pandemic indefinitely pulling the plug on the live music industry, the former-concert-promoter-turned-podcaster is explaining a new way the venue will use the stage.

“We have multiple live podcast events lined up,” he said. “That was one of the things that was born: the idea of being able to have conversations up there with people here and make it audience interactive. They needed another form of entertainment that we can do in here live and safely social distance.”

Deriso has been recording podcasts for months to fill the time while the concert industry is shelved. Last year, he launched a podcast company called Open Mic Studios, from which the popular RenoCast was born.

“I ended up just inviting a whole bunch of people to just do, like, personality pieces and ‘getting-to-know-yas,’” Deriso said. “I turned out to be pretty good at it and I had built the right client base. It just started springing up, and when I felt God pulling me toward being a personality in it, I went, OK, I’ll take this to the live setting.”

Due to current state of Nevada COVID restrictions, in order to put on live podcasts for an audience inside Virginia Street Brewhouse (or similar venues), Deriso said the business had to pivot to include a seated dinner for those in attendance.

Notably, the venue has also hosted a handful of “specialty food nights” in which musicians perform for people while they eat dinner.

The first “RenoCast Live!” was set for Jan. 22, featuring country singer-songwriter Jake Jacobson, who was scheduled to follow the podcast interview with a full band performance for the audience as they dined.

Jacobson, in fact, was one of the last musicians to perform at Virginia Street Brewhouse before COVID shut down concert venues across the world.

“He just crushed the room,” Deriso said, nostalgically. “There were like 800 people in here.”

As concert promoters like Deriso and music fans lament the loss of live music during the nearly yearlong pandemic, the industry has seen its revenues rocked.

According to a report by music industry magazine Pollstar, the live music business lost a projected $30 billion worldwide in 2020.

Which begs the question, when does Deriso think concerts — not makeshift music-during-a-dinner events, but true concerts — come back to venues like Virginia Street Brewhouse?

“October,” he said. “We are actively booking for October.”

PERFORMING ARTS PAUSED
Concerts are not the only live entertainment events that have been removed from calendars since COVID swept across the country.

The $50 billion-a-year live performing arts industry has also been dark for nearly a year, with productions stopped dead in the water by the coronavirus. According to nonprofit American for the Arts, the arts and culture sector has lost $14.6 billion in revenue as of late January.

Many who work in the industry have to find ways to make ends meet before their stage lights can turn back on.

Chad Sweet, technical director and production manager at the nonprofit Reno Little Theater, said he’s taken on a variety of side jobs since the RLT closed last March.

“I’ve been doing construction work and computer work, some lighting work for photography studios, and some video production work, whatever comes along,” Sweet said in a phone interview with the NNBW. “All this work just sort of sprouted up. We have such a great community here in Reno, there are loads of people out there sort of looking for work for the people that they know are out of work.”

Sweet noted it helps that his wife, Melissa Taylor, is executive director of RLT. Thanks to federal aid, her income has not been disrupted.

“Her job has been safe,” Sweet said. “And she’s been doing an amazing job keeping the company afloat during this time. So, we still have that one income coming in.”

Sweet said the theater closed its doors on what was supposed to be the opening night of its production of “The Imaginary Invalid.” The staff and performers spent more than a year on pre-production — costume design, set design, props, lighting and sound — and rehearsed for six weeks, Sweet said.

In the end, they never got to show the culmination of that work to a live audience in the RLT.

“Putting on a play is pretty labor-intensive,” Sweet said. “While I’m certainly saddened by the loss of my work and my job, I think what I’m more sad about are the things that we get into theater for the first place, which is the connections to people.

“What’s saddened me the most is that we don’t have that ability to come together in a communal space and experience this spirit of storytelling together.”

‘WE RELY ON THAT ENERGY’
Mary Bennett, producing artistic director of the nonprofit Brüka Theatre in downtown Reno, feels the same void.

“If you spend most of your life performing then all of a sudden there’s this breach, it’s really difficult,” said Bennett, who is also an actress. “Especially for live actors who are used to being in front of an audience and we get the energy from the people. As artists, we rely on that energy.”

Bennett also runs a touring theater that performs for area schools during the first five months of the year.

That was halted last year, and outright canceled this year.

Additionally, she is a non-denominational minister and officiant at the Peppermill Resort Spa Casino in Reno and other several wedding venues in the area.

“There were strings of income that I usually rely on as an artist outside of working at Brüka that did get shut down, so I needed to be able to make that up in some way,” Bennett said.

With that, Bennett got a job going door-to-door for the U.S. Census Bureau last spring.

In the fall, she got offered an opportunity — “which I jumped at,” she said — to create and teach a drama program at Doral Academy of Northern Nevada, a K-8 charter school in South Reno.

“What a light these kids are,” she said. “They’ve really been a soul-saver in a light of this, both artistically and having work to do.”