EDITOR’S NOTE: Each week in 2021, we will feature snippets of stories that published a decade ago to provide readers a 10-year perspective of business news in the region. This week’s stories first published in the Jan. 24, 2011, edition of the NNBW; the web versions are linked below. 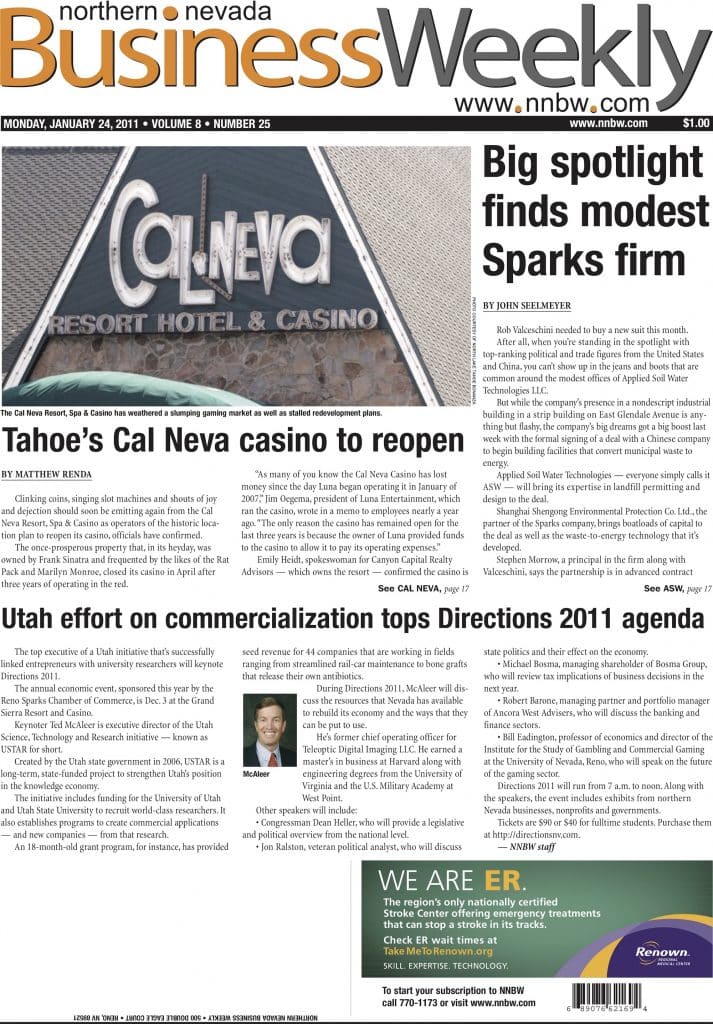 The cover of the January 24, 2011, edition of the Northern Nevada Business Weekly. NNBW File

Tahoe’s Cal Neva casino to reopen
Clinking coins, singing slot machines and shouts of joy and dejection should soon be emitting again from the Cal Neva Resort, Spa & Casino as operators of the historic location plan to reopen its casino, officials have confirmed.

The once-prosperous Crystal Bay property that, in its heyday, was owned by Frank Sinatra and frequented by the likes of the Rat Pack and Marilyn Monroe, closed its casino in April after three years of operating in the red.

“As many of you know the Cal Neva Casino has lost money since the day Luna began operating it in January of 2007,” Jim Oegema, president of Luna Entertainment, which ran the casino, wrote in a memo to employees nearly a year ago. “The only reason the casino has remained open for the last three years is because the owner of Luna provided funds to the casino to allow it to pay its operating expenses.”

Emily Heidt, spokeswoman for Canyon Capital Realty Advisors — which owns the resort — confirmed the casino is expected to open early in February.

— Page 1, by Matthew Renda
Big spotlight finds modest Sparks firm
Rob Valceschini needed to buy a new suit this month. After all, when you’re standing in the spotlight with top-ranking political and trade figures from the U.S. and China, you can’t show up in the jeans and boots that are common around the modest offices of Applied Soil Water Technologies LLC in Sparks.

But while the company’s presence in a nondescript industrial building in a strip building on East Glendale Avenue is anything but flashy, the company’s big dreams got a big boost last week with the formal signing of a deal with a Chinese company to begin building facilities that convert municipal waste to energy.

ASW will bring its expertise in landfill permitting and design to the deal. Shanghai Shengong Environmental Protection Co. Ltd., brings boatloads of capital to the deal — as well as the waste-to-energy technology that it’s developed.

Expansion into the Elko area and the addition of space to its Sparks facility also has helped the company see significant increases in revenue since 2007, says company President Michelle Sherven.

Western Environmental Testing had seen growth of 20 to 25 percent annually until a larger spike three years ago when it added staff and opened its small Elko office off Lamoille Highway.

The company in 2007 began testing Elko’s city water supply for inorganic contaminants and its sewage effluent to ensure that treated wastewater is in compliance with federal standards. The Elko facility mainly serves as an intake hub for soil and water samples taken from Western Environmental’s customers throughout Elko County.

“It really enabled us to reach some of those outlying areas and kind of close the gap between Reno and Elko,” Sherven says.