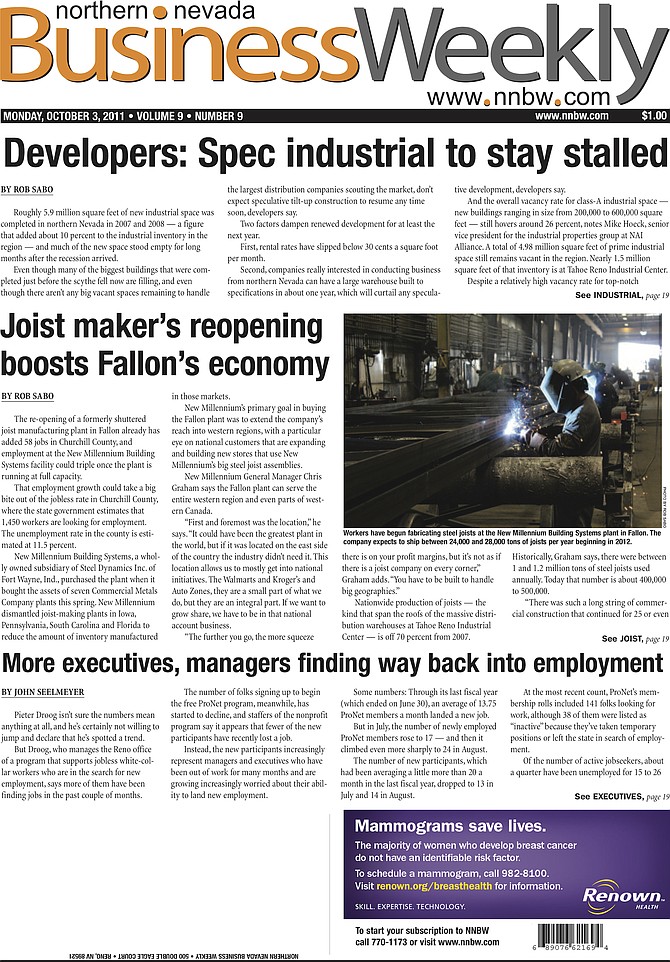 Roughly 5.9 million square feet of new industrial space was completed in Northern Nevada in 2007 and 2008 — a figure that added about 10% to the industrial inventory in the region — and much of the new space stood empty for long months after the recession arrived.

Even though many of the biggest buildings that were completed just before the scythe fell are now filling, and even though there aren’t any big vacant spaces remaining to handle the largest distribution companies scouting the market, don’t expect speculative tilt-up construction to resume any time soon, developers say.

Two factors dampen renewed development for at least the next year. First, rental rates have slipped below 30 cents a square foot per month. Second, companies interested in conducting business here can have a large warehouse built to specifications in about one year, which will curtail any speculative development, developers say.

The reopening of a formerly shuttered joist manufacturing plant in Fallon already has added 58 jobs in Churchill County, and employment at the New Millennium Building Systems facility could triple once the plant is running at full capacity.

That growth could take a big bite out of the jobless rate in Churchill County, where 1,450 workers are looking for employment. The unemployment rate in the county is estimated at 11.5%.

New Millennium Building Systems purchased the plant when it bought the assets of seven Commercial Metals Company plants this spring. New Millennium’s primary goal in buying the Fallon plant was to extend the company’s reach into western regions, with a particular eye on national customers that are expanding and building new stores that use New Millennium’s big steel joist assemblies.

Plans to merge operations of Squaw Valley USA with those of neighboring Alpine Meadows Ski Resort began taking shape between towers 10 and 11 on the famous KT-22 chairlift at Squaw, says Andy Wirth, president and CEO of Squaw Valley USA.

JMA Ventures will hold a minority interest in the newly formed company, which will be headed by Wirth as president. KSL Capital Ventures LLC, a privately held company based in Denver, will hold the majority interest.