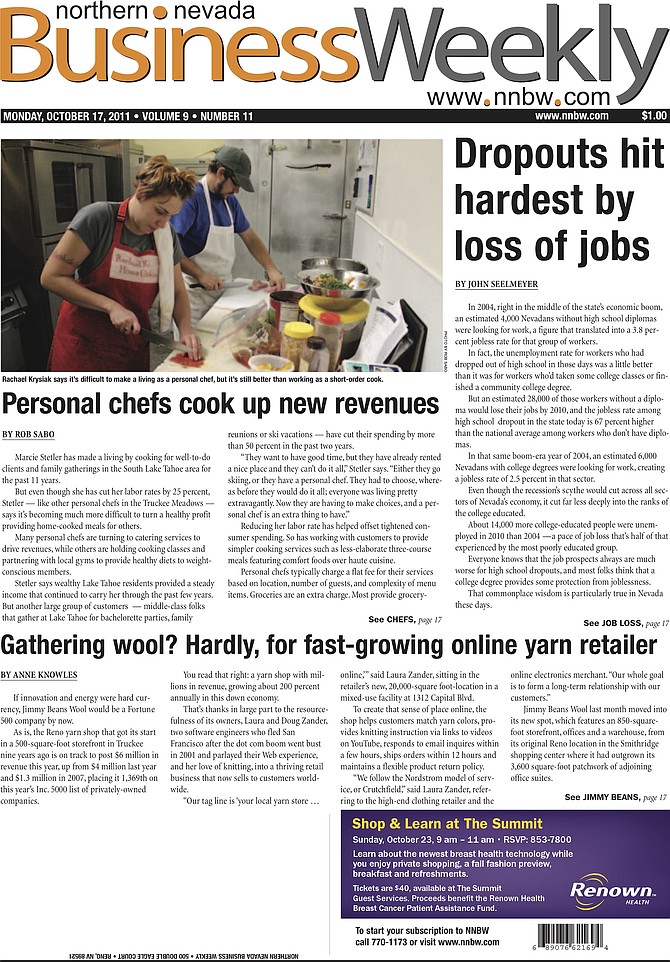 In 2004, in the middle of the state’s economic boom, an estimated 4,000 Nevadans without high school diplomas were looking for work, a figure that translated into a 3.8% jobless rate for that group of workers. In fact, the unemployment rate for workers who had dropped out of high school in those days was a little better than it was for workers who’d taken some college classes or finished a community college degree.

But an estimated 28,000 of those workers without a diploma would lose their jobs by 2010, and the jobless rate among high school dropouts in the state today is 67% higher than the national average among workers who don’t have diplomas. In that same boom-era year of 2004, an estimated 6,000 Nevadans with college degrees were looking for work, creating a jobless rate of 2.5% in that sector.

Even though the recession’s scythe would cut across all sectors of Nevada’s economy, it cut far less deeply into the ranks of higher education. About 14,000 more college-educated people were unemployed in 2010 than 2004 — a pace of job loss that’s half of that experienced by the most poorly educated group.

If innovation and energy were hard currency, Jimmy Beans Wool would be a Fortune 500 company by now.

As is, the Reno yarn shop that got its start in a 500-square-foot storefront in Truckee nine years ago is on track to post $6 million in revenue this year, up from $4 million last year and $1.3 million in 2007, placing it 1,369th on this year’s Inc. 5000 list of privately-owned companies.

You read that right: a yarn shop with millions in revenue, growing about 200% annually in this down economy. That’s thanks in large part to the resourcefulness of its owners, Laura and Doug Zander, two software engineers who fled San Francisco after the dot com boom went bust in 2001 and parlayed their web experience — and Laura’s love of knitting — into a thriving retail business that now sells to customers worldwide.

Marcie Stetler has made a living by cooking for well-to-do clients and family gatherings in the Lake Tahoe area for the past 11 years. But even though she has cut her labor rates by 25%, Stetler says it’s becoming more difficult to turn a healthy profit providing home-cooked meals for others.

Many personal chefs across the Truckee Meadows are turning to catering services to drive revenues, while others are holding cooking classes and partnering with local gyms to provide healthy diets to weight-conscious members.

Stetler says wealthy Tahoe residents provided a steady income that carried her through the past few years. But another large group of customers — middle-class folks who gather at Tahoe for bachelorette parties, family reunions or ski vacations — have cut their spending by more than 50% in the past two years.