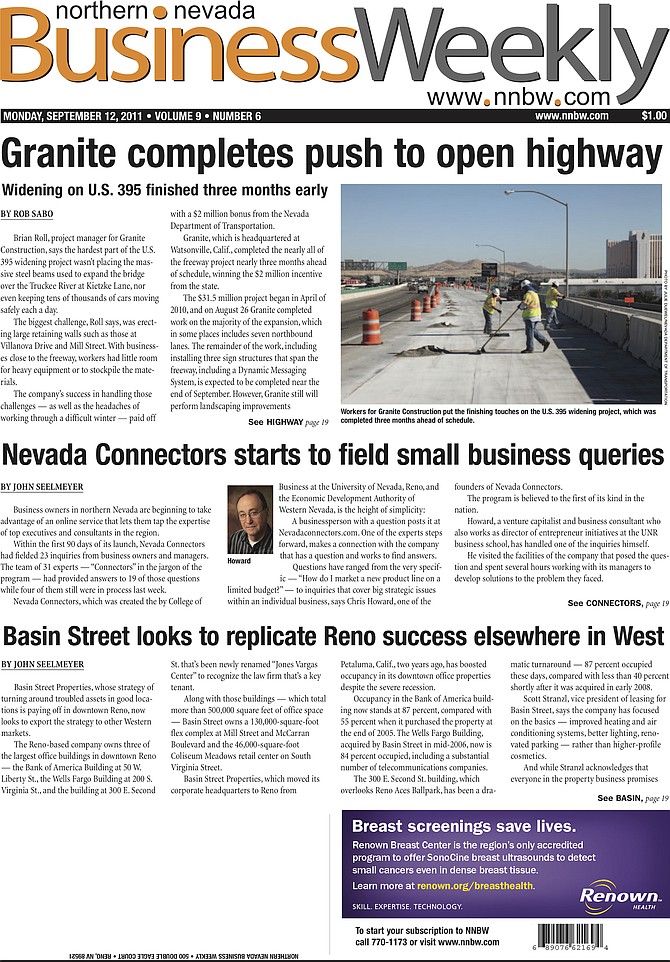 EDITOR’S NOTE: Each week in 2021, we will feature snippets of stories that published a decade ago to provide readers a 10-year perspective of business news in the region. This week’s stories first published in the Sept. 12, 2011, edition of the NNBW.

Brian Roll, project manager for Granite Construction, says the hardest part of the U.S. 395 widening project wasn’t placing the massive steel beams used to expand the bridge over the Truckee River at Kietzke Lane, nor even keeping tens of thousands of cars moving safely each a day.

The biggest challenge was erecting large retaining walls such as those at Villanova Drive and Mill Street. With businesses close to the freeway, workers had little room for heavy equipment or to stockpile the materials.

The company’s success in handling those challenges paid off with a $2 million bonus from the Nevada Department of Transportation, thanks to completing most of the $31.5 million project — which began April 2010 — nearly 3 months ahead of schedule.

Business owners in Northern Nevada are beginning to take advantage of an online service that lets them tap the expertise of top executives and consultants in the region.

Within the first 90 days of its launch, Nevada Connectors had fielded 23 inquiries from business owners and managers. The team of 31 experts — aka “Connectors” — had provided answers to 19 of those questions while four of them still were in process last week.

Nevada Connectors, which was created the by College of Business at the University of Nevada, Reno, and the Economic Development Authority of Western Nevada, is the height of simplicity.

A businessperson with a question posts it at Nevadaconnectors.com. One of the experts steps forward, makes a connection with the company that has a question and works to find answers.

Basin Street Properties, whose strategy of turning around troubled assets in good locations is paying off in Downtown Reno, now looks to export the strategy to other Western markets.

The Reno-based company owns three of the largest office buildings in downtown Reno — the Bank of America Building at 50 W. Liberty St., the Wells Fargo Building at 200 S. Virginia St., and the Jones Vargas Center at 300 E. Second St.

Along with those buildings — which total more than 500,000 square feet of office space — Basin Street owns a 130,000-square-foot flex complex at Mill Street and McCarran Boulevard and the 46,000-square-foot Coliseum Meadows retail center on South Virginia Street.

Basin Street Properties, which moved its corporate headquarters to Reno from Petaluma, Calif., two years ago, has boosted occupancy in its downtown office properties despite the severe recession.