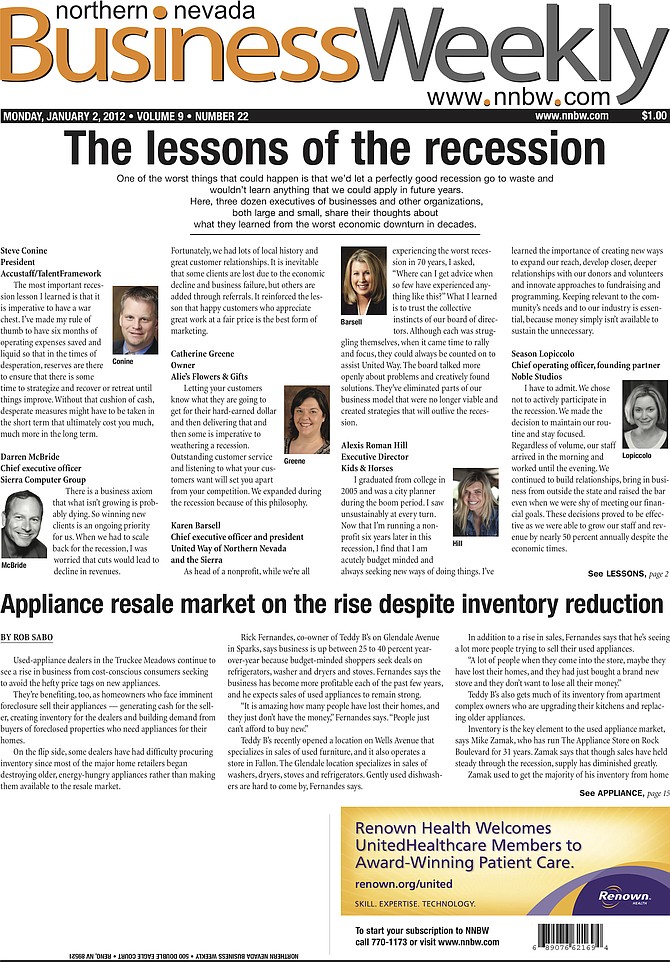 Cover of the Jan. 2, 2012, print edition of the Northern Nevada Business Weekly.

The lessons of the recession

“One of the worst things that could happen is that we’d let a perfectly good recession go to waste and wouldn’t learn anything that we could apply in future years,” NNBW staff wrote to introduce this cover story, which included quotes from three dozen Northern Nevada executives about what they learned from the worst economic downturn in decades, in a series of installments here, here and here.

“The most important recession lesson I learned is that it is imperative to have a war chest,” said Steve Conine, president of Accustaff/TalentFramework. “I’ve made my rule of thumb to have six months of operating expenses saved and liquid so that in the times of desperation, reserves are there to ensure that there is some time to strategize and recover or retreat until things improve.

"Without that cushion of cash, desperate measures might have to be taken in the short term that ultimately cost you much, much more in the long term.”

— Page 1, by NNBW staff
Appliance resale market on the rise despite inventory reduction

Used-appliance dealers in the Truckee Meadows continue to see a rise in business from cost-conscious consumers seeking to avoid the hefty price tags on new appliances.

They’re benefiting, too, as homeowners who face imminent foreclosure sell their appliances — generating cash for the seller, creating inventory for the dealers and building demand from buyers of foreclosed properties who need appliances for their homes. On the flip side, some dealers have had difficulty procuring inventory since most of the major home retailers began destroying older, energy-hungry appliances rather than making them available to the resale market.

Rick Fernandes, co-owner of Teddy B’s in Sparks, says business is up between 25 percent and 40 percent YOY because budget-minded shoppers seek deals on refrigerators, washer and dryers and stoves.

There’s a sweet spot that’s difficult to hit in the initial development of a mobile phone application for a hotel-casino, says Aron Ezra.

On one hand, the app needs to provide enough substance that potential users will download and use it, says Ezra, vice president of mobile for Bally Technologies. On the other hand, the mobile application needs to leave room for growth and shifts in direction as users decide how they want to use the fast-changing technology.

Ezra and the executive team of Circus Circus Reno are tracking users’ experiences closely in the first weeks after the downtown hotel-casino rolled out a mobile app developed by Bally Technologies last autumn.

About 400 people downloaded the app by the time the Christmas holidays rolled around, and Circus Circus was beginning to ramp up marketing through special offers available only through the app as well as a stronger push in its advertising materials.