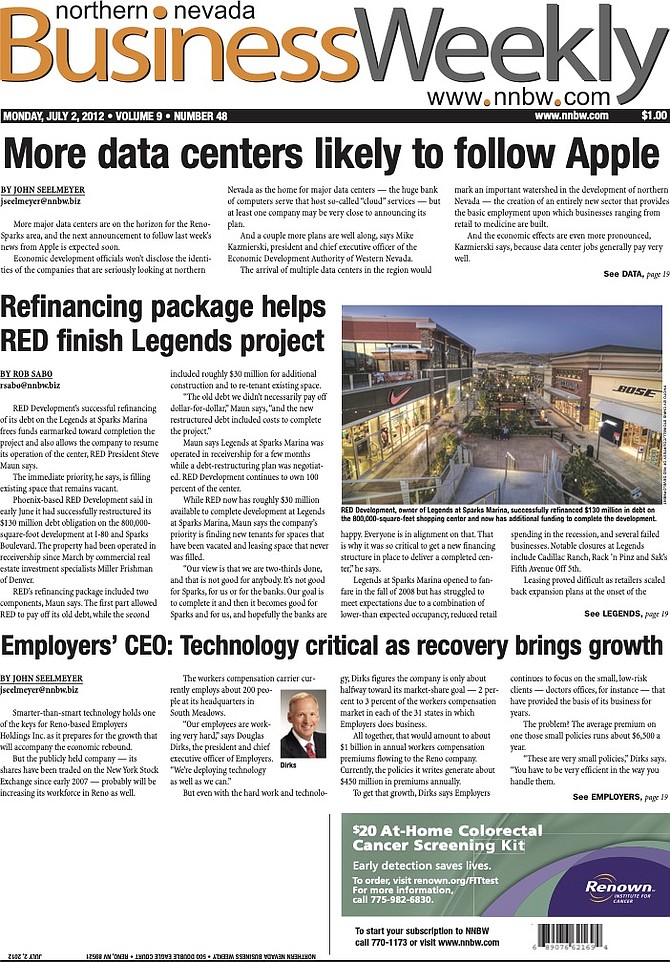 More major data centers are on the horizon for the Reno- Sparks area, and the next announcement to follow last week’s news from Apple is expected soon.
Economic development officials won’t disclose the identities of the companies that are seriously looking at northern
Nevada as the home for major data centers — the huge bank of computers serve that host so-called “cloud” services — but at least one company may be very close to announcing its plan.
And a couple more plans are well along, says Mike Kazmierski, president and chief executive officer of the Economic Development Authority of Western Nevada.
The arrival of multiple data centers in the region would mark an important watershed in the development of northern Nevada — the creation of an entirely new sector that provides the basic employment upon which businesses ranging from retail to medicine are built.

Refinancing package helps RED finish Legends project
RED Development’s successful refinancing of its debt on the Legends at Sparks Marina frees funds earmarked toward completion the project and also allows the company to resume its operation of the center, RED President Steve Maun says.
The immediate priority, he says, is filling existing space that remains vacant.
Phoenix-based RED Development said in early June it had successfully restructured its $130 million debt obligation on the 800,000- square-foot development at I-80 and Sparks Boulevard. The property had been operated in receivership since March by commercial real estate investment specialists Miller Frishman of Denver.
RED’s refinancing package included two components, Maun says. The first part allowed RED to pay off its old debt, while the second
included roughly $30 million for additional construction and to re-tenant existing space.
“The old debt we didn’t necessarily pay off dollar-for-dollar,” Maun says, “and the new restructured debt included costs to complete the project.”
Maun says Legends at Sparks Marina was operated in receivership for a few months while a debt-restructuring plan was negotiat- ed. RED Development continues to own 100 percent of the center.
While RED now has roughly $30 million available to complete development at Legends at Sparks Marina, Maun says the company’s priority is finding new tenants for spaces that have been vacated and leasing space that never was filled.

Speakers’ prepared remarks becoming rare in an era of informality
Smarter-than-smart technology holds one of the keys for Reno-based Employers Holdings Inc. as it prepares for the growth that will accompany the economic rebound.
But the publicly held company — its shares have been traded on the New York Stock Exchange since early 2007 — probably will be increasing its workforce in Reno as well.
The workers compensation carrier currently employs about 200 people at its headquarters in South Meadows.
“Our employees are working very hard,” says Douglas Dirks, the president and chief executive officer of Employers. “We’re deploying technology as well as we can.”
But even with the heard work and technology, Dirks figures the company is only about halfway toward its market-share goal — 2 percent to 3 percent of the workers compensation market in each of the 31 states in which Employers does business.

EDITOR’S NOTE: Each week, we feature snippets of stories that published a decade ago to provide readers a 10-year perspective of business news in the region. This week’s stories first published in the July 2, 2012, edition of the NNBW.