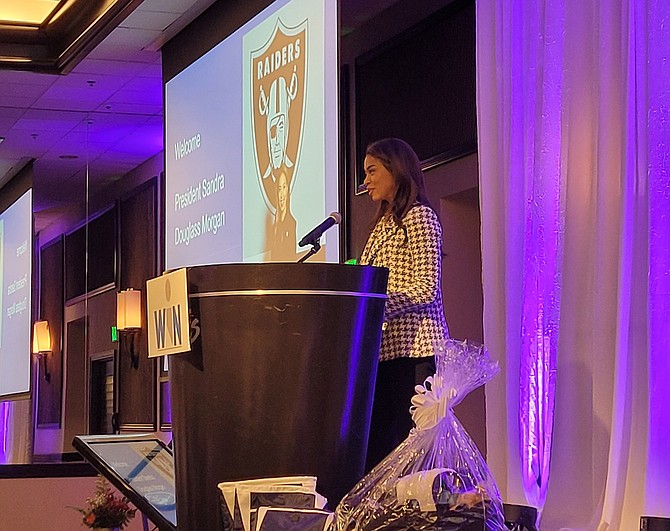 Las Vegas Raiders president Sandra Douglass Morgan, who has only been on the job for a few months, will certainly forge her own path as a top executive in the NFL.

In one way, though, she’s also following in the footsteps of some other pioneers who broke new ground as part of the Raiders’ organization.

Morgan, the first black woman to be named president of an NFL franchise, was the featured speaker at Thursday’s WIN “Nevada Day Celebration” business breakfast at the Atlantis Casino Resort Spa in Reno. She was joined at the podium by University of Nevada, Reno president Brian Sandoval and by Stephanie Rempe, the Wolf Pack’s first-year athletic director.

The Raiders, who were founded as the Oakland Raiders in the American Football League in 1960 and joined the NFL in the 1970 AFL-NFL merger, have long had a reputation as forward-thinking in terms of hiring women and members of minority groups, as well as taking chances on players from small colleges — including Historically Black Colleges and Universities (HBCU) schools — or who were considered expendable by other teams.

Among the organization’s firsts have been naming Art Shell as the first black head coach in the NFL’s modern era (1989); having great success under Tom Flores (1979-1987), the first minority coach to win a Super Bowl; and promoting Amy Trask to the CEO role in 1987, making her the first female in that position in NFL history.

In her Thursday speech, Douglass Morgan, a 1999 Nevada alumna, also noted that longtime Raiders general manager Al Davis was instrumental in moving the 1965 AFL All-Star game out of New Orleans after a number of black players encountered overt racism leading to the game.

“There's often a lot of talk now … about diversity, equity, inclusion, which is incredibly important. That's been the Raider way since its inception,” Douglass Morgan said. “In 1965, Al Davis actually moved the AFL All-Star game from New Orleans because black players were not being treated properly. In 1965. That would have been a very difficult thing for a leader to do in 2022, and he did it in 1965.

The Las Vegas Raiders are a sponsor for the upcoming Nevada Interscholastic Activities Association’s state football playoffs, the first deal of its sort between the NIAA and a pro sports franchise.

Douglass Morgan said she hopes it won’t be the last collaboration between the organization and sports in the Silver State, particularly since the Raiders’ home is the state-of-the-art Allegiant Stadium in Las Vegas.

“(At) the NFL owners meetings last week, they were talking about (the NFL’s) flag football initiative. And Mark (Raiders GM Mark Davis) leaned over and said, ‘We're doing that at the stadium, right?’ I mean, this is his top of mind. Which means it's my top of mind, as well.

“The stadium is part of the community … Mark understands that; I understand that very well. We work very closely with the Las Vegas Convention and Visitors Authority, also, to bring other world-class sporting events to the stadium.”

Last year, the NIAA’s state-title football games for the 5A, 4A, and 2A classes were played at Allegiant.

Notable: Douglass Morgan has also served on the Nevada State Athletic Commission and the Nevada Gaming Control Board.