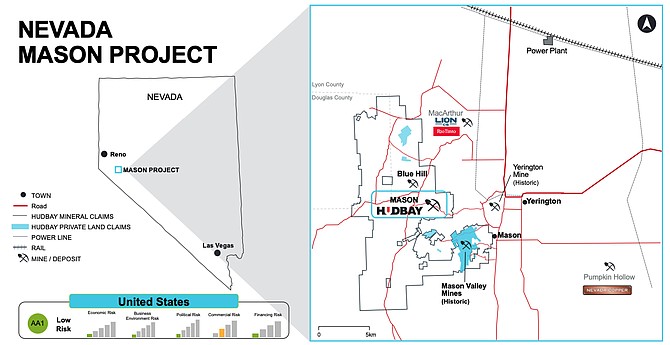 A page from Hudbay’s ‘Investor Presentation September 2022’ found at hudbayminerals.com.

Canadian mining company Hudbay Minerals recently presented its plans for its copper deposit for its Mason Project, still in its exploratory stage, to the Lyon County Commission.

Hudbay’s project in Yerington is in its early stages to determine the Mason deposit’s mineralization.
Matt Bingham, director of legal and public affairs for the company, and Jerry Bustamante, manager of community relations, introduced themselves to the Lyon County Commission on Aug. 18, emphasizing Hudbay still is “trying to understand what’s in the ground.”

“The benefits of our operation outweigh the impacts,” Bingham said. “We don’t want to operate where communities don’t want us.”

He said the ultimate goal is to minimize the impact on the environment and cultural resources, seeking input from local stakeholders, including community and board members.

According to a follow-up statement with the Appeal, the company had purchased Mason Resources including the Mason Project in December 2018.

“The excellent infrastructure, year-round access, strong community support for mining, and a clear permitting process make Mason an ideal project for Hudbay,” according to the statement. “Nevada is also a mining-friendly jurisdiction with a robust mining supply chain and experienced workforce, which we found attractive.”

The Mason Project is anticipated to be worth $770 million at $3.25 per pound and expected to become the third largest copper mine in the country.

The large deposit is planned 5 miles west of Yerington and meant to be a traditional open pit shovel/truck operation with a copper sulphide mineral processing plant capable of producing commercial grade copper and molybdenum concentrate. The plant is designed to operate at a rate of 120,000 tons per day. The mine’s plan shows for its 27-year operation peak mining rates would be achieved by year 13, with processing of rehandled ore from stockpiles to occur in the final seven years of operation.

Hudbay has been working to address community concerns about environmental impacts. In April 2021, the company released results showing a positive preliminary economic assessment, which originally determined the site’s mine life and feasibility.

Lyon residents, however, still had questions for staff members. At a March Smith Valley Citizen Advisory Board meeting, members asked about assessing the project’s potential impacts on water rights. Walker River Irrigation District Manager officials had informed them the Smith Valley Basin is closed and no new wells could be drilled.

“Ensuring the safety and protection of the quality and quantity of local water resources is one of our top priorities,” Hudbay’s statement to the Appeal said. “Still, the amount of water required for the Mason Project is yet to be determined. Many factors contribute to water usage. We need to finalize the design of the mine and decide which technologies we will use. That will determine the mine’s water consumption.”

Financially, the Mason Project is expected to require about $1.5 billion to $2 billion in capital investment, Bingham told the commission, and Hudbay anticipates employing 500 to 600 direct employees.

“Mines usually support anywhere from four to six jobs for every direct job,” he said.

That has raised the question of housing, he said, adding there is the possibility of spending up to $10 billion on wages, supplies and services over the life of the mine.

“We don’t know what the answer (for housing and development) is right now,” Bingham said. “We know it is going to be a challenge.”

Bingham said the Smith Valley meeting was encouraging and understood any apprehensions.
“We had great attendance,” Bingham said of the Smith Valley meeting in a follow-up with the Appeal. “We had good dialogue, and people were respectful. A couple was very concerned and it got a little animated, but it was mostly positive. … There were neighbors expressing they weren’t completely opposed. We understand people have legitimate concerns, and we don’t blame them.”

But on Aug. 18 as Hudbay made its first official presentation before the Board of Commissioners, Commissioner Vida Keller expressed concerns about Hudbay’s methods and lack of communication with the local government. Hudbay previously expressed interest in working with the county to develop a public lands bill, but Keller expressed some “frustration” that it had taken so long to come before the board.

“We heard all the rumbles,” Keller told Bingham on Aug. 18. “You’re part of our lands bill. Yet this is the first time you came to the commission. You may have talked to staff, but you went out into the public. You said you want to be in the communities. … Thank you for being here today and finally I’m glad you are here. I don’t like backdoor deals. I’m not going away.”

In a separate interview with the Appeal on Aug. 25, Keller said she supported Hudbay’s outreach efforts but said she was getting negative feedback from community members about its approach.
“Their lands bill had nothing to do with our lands bill to clean off property in or around the county,” she said. “We would like to acquire this land, and they wanted to provide maps to staff, but we as a commission had never sat down and reviewed maps in total or taken any action. There’s been no agenda, no action taken, but they would go out and speak to the public and work on this lands bill. It was the first time we’d seen them. I was a little frustrated.”

In an interview Aug. 31, Bingham said the company reached out to the board members and Lyon County staff in that week following the commission meeting to meet with a couple of the board members, including Keller and Commissioner Wes Henderson, and had spoken with County Manager Jeff Page, but said through the statement submitted to the Appeal the Aug. 18 meeting had been the first time the county invited Hudbay to present before the commission.

Bingham, who has an engineering background and legal experience in the mining industry and environmental issues, said Hudbay will be more proactive and transparent in Lyon County in responding to community inquiries about the project.

Chantae Lessard, head of the Mason Project, said she would be attending the board meetings as the point of contact.

“Now that I’m in the community, I’ll be able to talk to more people and will be attending the commissioners’ meetings, and we’ll have an ear on the ground to assess what the community is concerned about,” Lessard said. “We’ll be able to respond and maybe have more answers than we had before.”