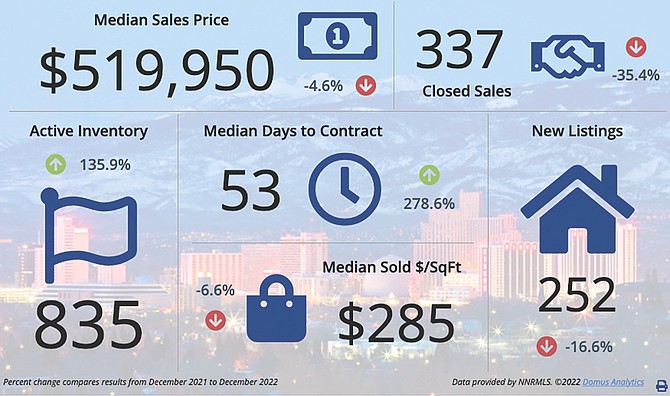 The median sales price of a home in Reno and Sparks was $519,950 in December 2022. Courtesy Reno/Sparks Association of Realtors

All signs are pointing to a cooling off period in 2023 for residential and rental real estate.

According to the Reno/Sparks Association of Realtors, home sales in December declined north of 35 percent from the previous year. The 232 homes that sold in Reno for the final month of 2022 represented an even bigger dip – 37.5 percent – from the same month in 2021. Sparks, meanwhile, saw a 31 percent drop in home sales for the month.

There were a total of 5,179 homes sold in Greater Reno-Sparks in 2022, a nearly 20 percent decline from 2021. Not surprisingly, rising interest rates are the culprit, said Sara Sharkey, president of Reno/Sparks Association of Realtors and broker-salesperson at RE/MAX Professionals of Sparks.

“It has definitely slowed down a bit, which is good; that’s what (the Federal Reserve) was trying to do by increasing interest rates,” Sharkey told NNBW in an interview last week. “Prices were definitely going out of control. Our sellers liked it, but buyers weren’t as happy.”

“It needed to happen,” Sharkey added. “It was not sustainable for those prices. I believe we will still see a little more price decrease in 2023. We don’t know exactly how much, and we are hoping it won’t be crazy, but we want to have a more stable market.”

Prices are falling as well, SNR reports. The median price for a single-family stick-built home was just shy of $520,000 in December, a year-over-year decrease of 4.6 percent. In Reno, the median price in December was $533,532, a nearly 6 percent drop from November. Home values held up in Sparks slightly better – the December median price of $495,000 was off just under 3 percent from the prior month.

The dip in values has also led to fewer listings. In 2022 there were a total of 6,692 homes listed on the Multiple Listing Service; in 2021 there were 6,948. Homes went under contract in an average time of one week in the frothy days of 2021, but as interest rates spiked last year that number more than doubled to 15 days to contract in 2022, SNR reports.

“(Buyers) have a little bit more time to make choices, and things aren’t moving crazy fast,” Sharkey said. “The market is different. It’s a cooling off time, and buyers can take more time in making decisions on what they want, where they want to be, and what price they think they can afford.”

Sharkey expects sales to remain soft in the early part of the first quarter of 2023, especially in light of the continuous snowstorms that have hampered selling efforts and home showings. The extreme weather that’s pounded the region since the new year started also has the potential to slow the pace of delivery for new homes.

“We are trying to get there,” Sharkey said.

The multifamily rental sector has seen some changes as well. After years of escalating rents, including a record 12 percent year-over-year increase in 2021, the average median rent for Reno-Sparks declined in two quarters of 2022, the Nevada State Apartment Association reports.

Monthly rents in the fourth quarter of last year averaged $1,490, down 2 percent from the end of the third quarter of 2022. The modest decline may be attributed in part to the large number of apartment units brought online last year – there have been more than 7,200 new apartment doors added to inventory since 2018, the NSAA reports, and more than 1,300 apartment units were added last year alone, said NSAA Executive Director Robin Lee.

That large number of new doors pushed the vacancy rate to 8.5 percent, and there are more than 3,900 units under construction across the Truckee Meadows and neighboring communities, Lee said.

“There will be more vacancy coming,” Lee said. “Because of the state of the economy in general, people are moving in together. We are seeing a lot more roommate situations, or people moving in with family and friends, which is increasing the vacancy rate.”

Rental rates are expected to rise slightly in 2023, Lee noted, albeit at a modest pace with no projected double-digit increases. The uncertainty of a national recession and lack of consumer confidence could impact landlord’s ability to push rents.

“The cost of doing business is just like the cost of living — everything has gone up,” Lee said. “Rents are a reflection of the economy, and all we can do is hang on.”