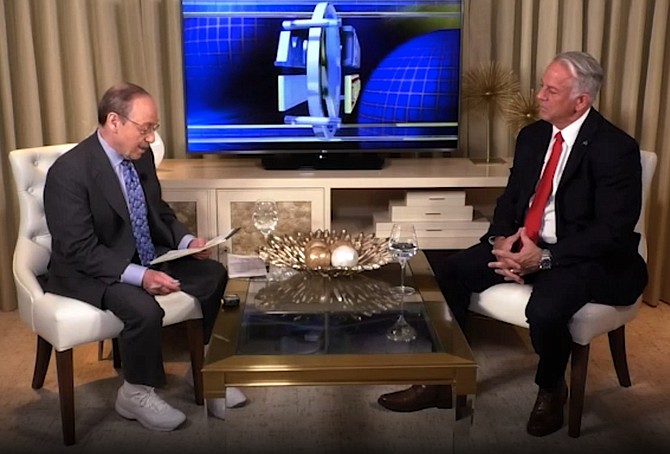 Host Sam Shad (left) and Clark County Sheriff Joe Lombardo during an episode of Nevada Newsmakers that was posted June 1, 2022.

Nevada Gov. Joe Lombardo said Monday he wants to cut business taxes, suspend the state gasoline tax for a year, make the single biggest investment in education in Nevada history and raise state employee pay 12% over the next two years.

In his first State of the State address to a packed joint session of the Democrat-controlled Legislature in the assembly chamber in Carson City, the Republican also proposed stiffening penalties for criminals, creating a new state office to expand school choice and repealing election reforms mandating mail-in ballots be sent to all voters. He insisted all the initiatives can be accomplished without any new taxes.

Lombardo announced plans to join Tesla CEO Elon Musk on Tuesday to unveil a new facility, which he said was part of his determination to further diversify Nevada's economy beyond its heavy reliance on casinos and tourism.

Lombardo's lofty legislative goals took center stage in his speech setting the stage for what could be a combative legislative session after his razor-thin victory in the western swing state.

``My budget doesn't raise one dime of new taxes,`` Lombardo said, claiming his plan cuts taxes for households and businesses, pays down debt and saves ``$1 for every new dollar spent in the general fund.``

He said he's determined to work cooperatively with majority Democrats and minority Republicans alike to accomplish an ambitious agenda that he says would make the state even stronger while spending within its means.

``As governor, I am filled with hope and optimism of what we can accomplish if we simply summon the will to work together,'' Lombardo said in his speech in the state capital. ``On the one hand, we have exciting opportunities within our grasp but, on the other, we must not allow ourselves to give way to the temptation to overspend.''

``Not a penny of the state's one-time surplus will be used to fund any recurring programs,'' he said.

Lombardo was the only Republican in the nation to defeat a sitting Democratic governor in November, a significant win in a western battleground state where a predicted wave of GOP victories didn't otherwise materialize.

He said the executive budget he will present to lawmakers when they return in two weeks to Carson City for the biennial legislative session will lower the tax burden on working families and businesses. He said his proposal to suspend the state motor vehicle fuel tax for the next 12 months will save consumers and businesses approximately $250 million dollars.

``In terms of a family of four, that translates to hundreds of dollars a year in savings,'' he said Monday.

``My budget also saves taxpayers over $260 million dollars in interest payments on bonds, enabling us to, among other things, create more construction jobs in future years.

Lombardo also expanded on plans he discussed during the campaign to walk back criminal justice reforms passed under Sisolak that he has called ``soft on crime.''

In a nod to bipartisanship, his opening remarks included a moment of silence to remember a host of Nevada leaders. They included the late Democratic U.S. Senate Majority Leader Harry Reid, ``a man who, whether you agreed with him or not, never stopped fighting for Nevada all the way to the top.''

In his first three weeks in office, Lombardo already has enacted four executive orders, including one that tasks the Department of Administration to address an approximate 24% vacancy rate among state employees. The order also directed state agencies to return to pre-pandemic operations, including normal in-person hours by July 1.

Another executive order requires all executive branch agencies, departments and others to review all existing regulations to recommend which should be eliminated, as well as explaining why new regulations qualify for exceptions.

Meanwhile, Democratic legislators have teased legislation that, if passed, would test how Lombardo uses his veto power.