INCLINE VILLAGE, Nev. — After some consideration, Sierra Nevada College will not be placing its dormitory units on the short-term rental service Airbnb during the summer months that the units sit empty.

The decision comes as more communities around Lake Tahoe take up the short-term rental debate, including Washoe County, where commissioners plan to address the county’s confusing regulations in early 2019.

Sierra Nevada College started discussing the idea of putting the dorm units on Airbnb as a way to use the facilities during down time, explained Daniel Kelly, SNC marketing director. Placing the units on Airbnb also would generate revenue for the college.

The idea made its way into the college’s November newsletter.

“Did you know that SNC Tahoe will be renting out rooms within the dorms through Airbnb? These rooms will be available during June and July. Help us spread the word about this opportunity for people to visit and stay on our campus for an affordable price during the busy summer season,” the newsletter stated.

However, after some consideration the college decided turning dorm rooms into summertime short-term rentals — becoming what Kelly described as a “hotel” — did not align with the college’s goals.

“We’re not going to rent out the rooms in that fashion,” Kelly said. “We’re still going to continue to offer the rooms to groups as is in line with our academic mission and for educational purposes, but we won’t be offering those rooms on Airbnb.”

The decision will likely spare the college from an increasingly contentious debate.

The issue of short-term rentals, a term interchangeably used with vacation home rentals, has risen to one of the most critical topics for communities around the lake.

South Lake Tahoe voters decided in November to largely ban VHRs from residential neighborhoods. The vote and outcome represent a momentous development in a debate that has been raging in the city for years.

Across the state line in Nevada, Douglas County commissioners recently floated the idea of putting VHRs on the 2020 ballot. The suggestion was made amid ongoing conversations about where to allow VHRs in the county.

In Washoe County, which includes the communities of Incline Village and Crystal Bay, commissioners intend on addressing short-term rental policies in January.

While it will ultimately be up to the commissioners to decide the direction of the regulations, the hope is any potential changes will provide some clarity.

The rules currently on the books have created a regulatory “gray area,” noted Bob Webb, planning manager in the Washoe County Planning and Building Division.

The confusion arises from two sections of the county code.

In one section the code established the authority for the Reno-Sparks Convention and Visitors Authority to issue licenses and collect transient occupancy tax — a room tax levied against transient lodging such as hotels and short-term rentals.

In seeming contradiction, the development section of the county code, however, effectively prohibits short-term rentals in residential areas.

“There’s a conflict or a gray area between the two codes,” Webb said.

That gray area in the rules translates to a bit of a mixed bag on the ground. There are short-term rentals currently operating in residential areas throughout Washoe County, from Incline Village to Reno to Sparks and elsewhere.

Some of those operate with the necessary permit from the Reno-Sparks Convention and Visitors Authority. Others operate completely off the books.

The county does not proactively police the short-term rentals. Instead its driven by complaints. And at the moment, county staff are delaying action in a handful of cases county-wide because of possible changes coming.

The county commissioners are tentatively expected to start the discussion at their Jan. 22 meeting, although the date is subject to change (upcoming and past agendas can be viewed at http://www.washoecounty.us/bcc/board_committees).

Commission Chair Marsha Berkbigler, who represents the portion of Washoe County that includes Incline Village, said she hopes commissioners refrain from “jumping into the same pot” that the city of South Lake Tahoe entered.

The reality is the two communities are very different, Berkbigler said, noting that Incline Village lacks the large number of hotels and traditional lodging properties that South Shore has. While there are concerns in the Incline and Crystal Bay community, she said the issue has not risen to the level it is at on South Shore.

“I don’t think it’s as much of a flashpoint in Incline.”

Ultimately, commissioners can choose to direct staff in any number of directions, from an all out ban on short-term rentals in residential areas, to a completely hands-off regulatory approach, to any number of places between those two extremes.

Before any final product is considered by the board, however, Berkbigler said the county will bring it to the local citizen advisory board and the regular Incline Village/Crystal Bay community meeting. 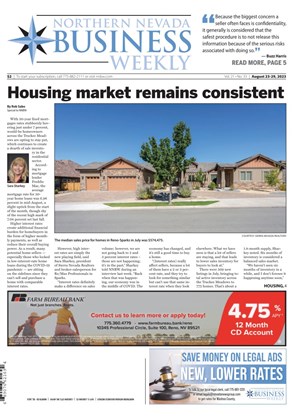