Shannon Litz/Nevada Appeal News Service Investigators at the scene of a homicide in the Gardnerville Ranchos. Jeffrey Clayton John, 24, of Markleeville, was killed early Friday and six men were taken into custody in connection with a brawl at a duplex near the intersection of Tillman Lane and Zinfandel Drive. 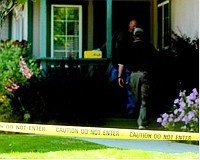