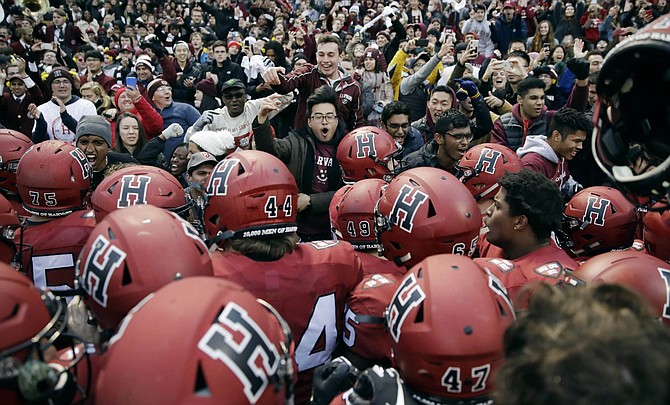 FILE - In this Nov. 17, 2018, file photo, Harvard players, students and fans celebrate their 45-27 win over Yale after an NCAA college football game at Fenway Park in Boston. The Ivy League has canceled all fall sports because of the coronavirus pandemic. 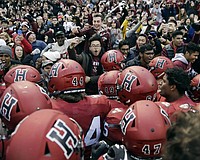 Leave it to the Ivy League to be the voice of reason in college athletics. While the rest of college athletics is proceeding as if the coronavirus pandemic is a thing of the past, the Ivy League recently announced it has canceled its fall sports season. Harvard, Yale, Brown, Penn, Dartmouth, Cornell, Columbia and Princeton will not conduct athletic events until at least Jan. 1, 2021. “We are entrusted to create and maintain an educational environment that is guided by health and safety considerations,” the Ivy League Council of Presidents said in a statement. The Ivy League was also ahead of the curve when it announced March 10 it had canceled its postseason basketball tournament. Right now, as coronavirus cases spike throughout the country (nothing much has changed since March), it would make sense for other conferences to follow the Ivy League’s lead once again. But don’t count on it.