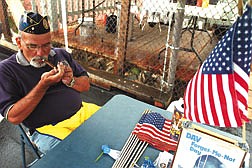 David W. Wyble, Sr., lights up a cigar along Main Street in Virginia City Sunday. Wyble is Commander of Chapter 7 of the Disabled American Veterans of Carson City.