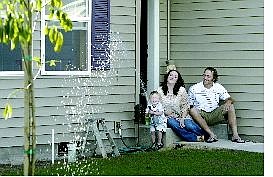 Cathleen Allison/Nevada Appeal Sarah and Lynn Hasson water their new tree at their Dayton home with son Lucas, 2, on Monday night. The Hassons recently moved into the home they built through the Citizens for Affordable Homes program.