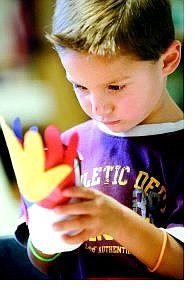 Diego Lopez, 4, of Carson City makes a turkey Tuesday morning at the Children&#039;s Museum of Northern Nevada. The Books and Brags program is held at the museum every Tuesday, and includes storytime and crafts. Cathleen Allison/Nevada Appeal