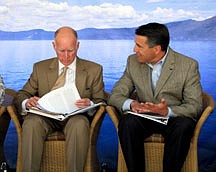 California Gov. Jerry Brown, left, and Nevada Gov. Brian Sandoval attend the 15th annual Tahoe Summit on Tuesday, Aug. 16, 2011 at Homewood Mountain Resort in Homewood, Calif. Brown and Sandoval are pledging to work together to protect Lake Tahoe even as tensions between the neighboring states and a regulatory agency simmer. The two governors vowed Tuesday at the 15th Annual Lake Tahoe Summit that they would cooperate to update the lake&#039;s 20-year regional plan, which guides development and environmental regulations in the region. (AP Photo/Sandra Chereb)