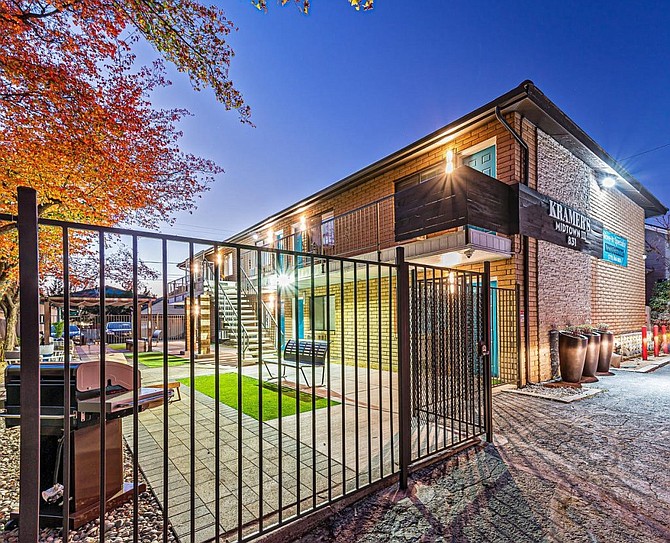 Kramer's Midtown Apartments were among many investment properties sold in 2020 in Greater Reno-Sparks. Photo: Marcus & Milichap

Uncertainty about 1031 exchanges from the incoming presidential administration has led to a flurry of apartment sales in Northern Nevada. Real estate investors have long used 1031 exchanges to defer capital gains taxes on the sale of commercial properties. In an exchange, investors don’t have to pay taxes on the proceeds of a sale if they reinvested those funds into a similar asset.

The Biden administration in 2020 proposed eliminating exchanges for investors making more than $400,000 a year.

The proposal may not hurt smaller investors swapping a six-unit duplex for another, but it could have a profound effect on well-heeled and institutional investors who purchase large multifamily complexes.

Ken Blomsterberg, senior managing director of investments with Marcus & Millichap, told the NNBW that multifamily sales started strong in the first quarter of 2020 before the effects of the pandemic were fully felt. Sales dried up over the ensuing months before exploding again beginning in September.

Marcus & Millichap put a number of large properties under contract, including Horizon at South Meadows, a 344-unit complex that was built in 2005, and Sundance West, a 350-unit complex off Moana Lane. The Horizon deal, he noted, is one of the region’s largest sales by dollar volume.

“Moving into 2021, we definitely have a substantial pipeline of properties that will probably total close to $200 million in sales, Blomsterberg said.

‘Activity has been phenomenal’
Uncertainty about the exchange process is one reason why so many deals are getting done. Daniel Winrod, associate with the multifamily investment team at Marcus & Millichap, told the NNBW that eliminating exchanges for certain investors would be detrimental across all sectors of the commercial real estate market.

“The primary reason deals happen is due to the 1031 exchange,” he said. “It would put pressure on owners and their ability to move in and out of real estate.”

Added Blomsterberg: “A lot of our large deals are 1031 exchanges. If they take that away it will probably slow down the velocity.”

Owners, meanwhile, are becoming hesitant to sell since they might not be able to complete an exchange to defer capital gains taxes.

Regardless, the region’s multifamily market remains strong, and there’s heavy competition for investment opportunities from investors across the country, Blomsterberg said.

“Owners are reluctant to sell at this time,” he said. “It’s a good market, but if they do sell, they have got to do a 1031, and where do they go that’s got a better runway than Reno with all the potential growth?”

“Buyers aren’t just west of the Rockies like it used to be for many years,” Blomsterberg added. “Reno has gone viral — (sales) activity has been phenomenal. When we fully expose properties to the market, we are getting like 15 offers.”

In 2021, ‘you will see continued interest’
Another trend the investment team at Marcus & Millichap identified is potential buyers are often willing to put up non-refundable deposits upon execution of purchase and sale agreements in order to distance themselves from competitors.

It speaks to the aggressiveness of the buying pool to enter the Northern Nevada market, said Ryan Rife, first vice president of investments with Marcus & Millichap.

“Buyers are doing everything they can in order to get awarded a deal,” Rife said. “In 2021, as long as the market fundamentals stay strong with population and job growth and compressed vacancy, you will see continued interest in this market.

“Given historically low interest rates that should stay around, the outlook is good for multifamily transactions,” Rife added. “You have got some (increased) vacancy with new projects coming online, but we have seen over the last few quarters that a substantial amount of units that have come online have been absorbed quickly. It speaks to the overall strength of the multifamily market in Northern Nevada.”

With several thousand new apartment doors opening in 2021, property owners likely will not be as concerned with pushing rent prices as attracting renters to stabilize occupancy, the Marcus and Millichap team noted.

Renters fall into three classes, Rowley told the NNBW: those who can and are paying rent, those who are trying to but may not be able to make full rent; and those who aren’t honoring their lease obligations.

“Those people are gaming the system,” he said. “If a lot of people are evicted, there’s going to be a glut of potential tenants who have bad credit that may need to find someplace to live — that’s a big uncertainty.”

Despite the potential for a host of tenant evictions once the moratorium ends, multifamily construction is still booming. Real estate appraisal firm Johnson Perkins Griffin reported more than 5,000 units under construction in the third quarter of 2020 with another 5,200 in the planning stages.

“We have a fair amount of supply coming online; however, given the fact that our vacancy has dropped dramatically and rents have gone up, there might be some quarter-to-quarter imbalances,” Rowley said. “Overall, I expect our continued drop in unemployment and the new companies coming here to be positive for rents. The negatives will be the uncertainty from people who played the ‘rent roulette’ game and people who have decided to relocate out of Reno.

“Our region is poised for tremendous growth, and that will be very positive for the multifamily market.”