What to watch in the 2021 legislative session: A guide to Nevada’s biggest policy debates 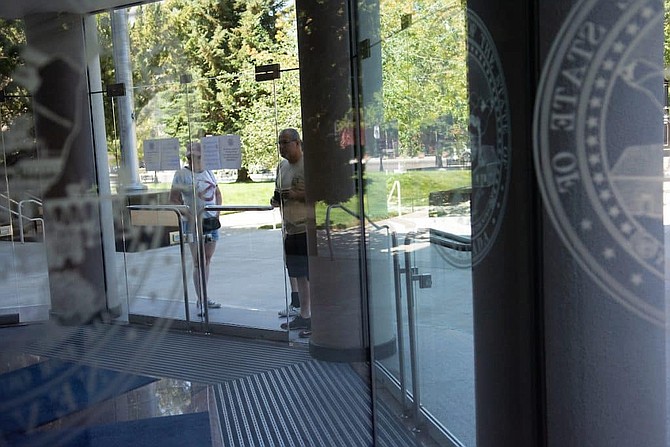 The Legislature on Sunday, Aug. 2, 2020 during the third day of the 32nd Special Session of the Legislature in Carson City. The building is closed to the public due to COVID-19. Photo: David Calvert / Nevada Independent

The 2021 session is likely to be defined by Nevada’s immediate budget challenges and efforts to recover from the damage of the ongoing pandemic.

But lawmakers are also poised to work on policy that could shape the state’s long-term trajectory, including implementing a redesigned school funding formula, laying groundwork for a more diversified economy and considering changes to a mining tax model in place since Nevada gained statehood in the 1800s.

Instead of tracking each of the hundreds of bills introduced each session, The Nevada Independent this year has compiled a summary of some of the most interesting storylines emerging for the Legislature:

K-12 EDUCATION
The 2019 session brought a major change to the way the state funds K-12 education. The passage of SB543 created the Pupil Centered Funding Plan, which revamps how education dollars will be distributed throughout the state.

It’s being implemented this budget cycle, but there was not an infusion of new K-12 funding to go along with it. The Commission on School Funding is expected to unveil recommendations for how to achieve optimal funding levels over time.

The big question is whether efforts to boost education funding translate to any tax reforms this session, especially as the state reels from the economic consequences of the pandemic.

Expect also to see some conversations surrounding competency-based education, which is rooted in the belief that children should move ahead at their own pace after mastering skills and concepts.

Additionally, the pandemic-forced transition to remote learning — which unearthed a host of inequities surrounding technology — appears to be primed for legislative attention.

The Senate Committee on Education, on behalf of the Clark County School District, has introduced a bill draft request to create a Nevada K-16 Connectivity and Innovation Advisory Commission for “the general purpose of coordinating the implementation of telecommunications services for education.”

HIGHER EDUCATION
Amid deep revenue shortfalls, the Nevada System of Higher Education saw state legislators and the governor slash roughly $135 million from its budget by the middle of last year.

With the pandemic still ongoing, higher education officials have planned for an additional 12 percent cut through the next two years, or roughly $85 million reductions in both fiscal years 2022 and 2023.

Even so, higher education leaders have expressed optimism that the larger-than-expected budget proposal unveiled by Gov. Steve Sisolak ahead of his State of the State address — which restored several of the higher education cuts made last year — could portend few additional cuts through 2021.

NSHE would also likely benefit from any new federal coronavirus aid passed later this year and which has in the past sought to buoy colleges and universities.

Legislators will also likely grapple with the early stages of a proposed plan to split NSHE in two, possibly creating a new independent governing body separate from the regents to handle the state’s four community colleges.

No details of such a framework have been announced since the State of the State, however, and it remains unclear how legislators plan to move forward in designing such a system.

The move comes in the wake of a narrowly failed 2020 ballot initiative backed by legislators: Question 1. The measure would have removed the Board of Regents from the state Constitution and was frequently cast by some lawmakers as a necessary measure to improve accountability for NSHE.

HEALTH CARE
The budget, perhaps more than ever, is a centerpiece of health care conversations heading into the 2021 legislative session. The governor’s proposed budget restores a 6 percent cut to Medicaid rates made during a special legislative session last summer and much pilloried by health care providers.

However, after the recent announcement from the federal government that an enhanced federal matching rate for Medicaid will be extended through all of 2021, the question now is how many state general fund dollars are newly in play — and where they will go.

An estimate from the Kaiser Family Foundation estimates that extending the enhanced rate will save Nevada about $50 million a quarter.Beyond the budget, health care transparency will be a continued theme through a bill to create an all-payer claims database and five drug pricing transparency proposals put forward by an interim committee tasked with studying the issue.

Lawmakers will also consider a bill that will codify some changes to telehealth that have been made during the pandemic and look at legislation to address crisis mental health services, including a bill to implement 988, the new national suicide hotline.

It’s not yet clear whether an interim study looking into the feasibility of allowing Nevadans to buy into the state’s public employee benefits program, or PEBP, will manifest into actual legislation this session.

ECONOMIC DEVELOPMENT
As Nevada’s economy continues to reel in tandem with the pandemic-battered tourism industry, Sisolak is doubling down on a multi-pronged economic development vision.

Part of it includes immediate relief for businesses and individuals under stress, including a proposed $50 million boost to the Pandemic Emergency Technical Support (PETS) small business grant program, funds to keep unemployment computer programming up-to-date and a small business advocacy center that would be a clearinghouse for business owner questions.

Sisolak hopes to boost the economy by fast-tracking pending infrastructure projects that would create jobs (including the addition of $75 million to a previously created but never funded State Infrastructure Bank), focusing on renewable energy development and storage, and creating “Innovation Zones” — a concept that has yet to be fully described.

He also wants to create a “Nevada Job Force” to develop job training programs that can redirect workers into emerging fields.

ENERGY/ENVIRONMENT
Sisolak’s climate strategy could be put to the test during the legislative session. It called for transitioning away from natural gas, requiring new homes to support all-electric appliances and giving customers more opportunities to choose between natural gas and electricity in existing homes.

With the backing of environmental groups, Assemblywoman Lesley Cohen (D-Las Vegas) is sponsoring a bill requiring gas utilities to undergo a more exhaustive planning process before utility regulators approve new infrastructure, paid for by ratepayers, that could quickly become outdated amid a push to transition away from fossil fuels.

Southwest Gas, the state’s largest gas utility, is expected to back legislation to replace infrastructure, an effort similar to what utilities have done in other states.
Legislators will also take up a host of proposed changes to how the state funds its highway system, including a proposed constitutional amendment broadening the use of fuel taxes to “transportation infrastructure,” as well as take additional steps to encourage more widespread adoption of electric vehicles.

Sisolak also promised during his State of the State address to pass a “bold energy bill establishing our commitment to increased transmission, storage, and distribution of all forms of clean energy.”

Additional details have not been introduced, but such a measure could play a role in boosting or supplementing plans by NV Energy to massively expand the state’s electric infrastructure through its $2 billion Greenlink Nevada project.

WATER
The Las Vegas pipeline loomed over many of the discussions about changing water law during the 2019 session. With the pipeline proposal shelved, debates over water could be less prominent in the session.

Still, Senate Joint Resolution 1, proposed by the state, would start the process of amending the Constitution to give the Court of Appeals, rather than local district courts, jurisdiction in cases that appeal regulatory decisions. SJR1 is not expected to go far.

It would mark a significant change in the legal system for challenging state water decisions and the order of operations for cases in the judicial system. Lawmakers, at the agency’s request, may also look at creating new programs for water banking and conservation credits.

CRIMINAL JUSTICE REFORM
While the 2019 session was seen as heavily focused on criminal justice reform, with the passage of AB236 that was meant to reduce the prison population, 2021 is expected to be more focused on refining that work and addressing the omnibus bill’s unintended consequences.

At least two bills to abolish the death penalty have been requested, although the leader of the Senate is noncommittal about hearing such a bill. Lawmakers may revisit the idea of decriminalizing traffic tickets — an effort that failed last session because of opposition from local governments funded through ticket fees, but has been effectively put into practice in some parts of the state during the pandemic.

The Legislature may also consider changing DUI law to reflect how marijuana works through the body differently than alcohol. On the heels of frequent Black Lives Matter protests, advocates are calling for more policing reform. Lawmakers this summer banned chokeholds and pare down protections for police officers accused of misconduct.

TAX POLICY
Sisolak has included no significant tax increases in his budget, but lawmakers will have to consider two proposals proffered by the Clark County Education Association — one raising the sales tax and another raising the gaming tax. Democratic legislative leaders say they oppose the initiatives but are eager to consider some sort of revenue-raising plan.

Three proposals to adjust the tax on mining are ripe for discussion and could raise anywhere between $170 and $541 million per biennium, although they would need voter approval in 2022 and would not provide immediate relief this budget cycle.

Legislators are optimistic about plans sketched by President Joe Biden to provide significant, flexible federal funding to state and local governments, which could help blunt expected budget cuts in Nevada.

MINING
The Legislature is expected to weigh three resolutions to increase mining taxes, capped by the state’s Constitution.

The conversation around the mining tax could be closely tied to conversations around the budget. If any of the three resolutions, passed in the special session over the summer, are approved this year, they will go before the voters in 2022. Nevada’s top mining company, Nevada Gold Mines, and the Nevada Mining Association, are already gearing up for a fight, spending money on ads to promote the industry.

It’s possible that lawmakers could negotiate a compromise with the industry that seeks to remove tax exemptions for the mining industry, rather than amending the Constitution.

But then the secretary of state called for a mostly mail primary, and lawmakers voted on party lines over the summer on AB4 — a measure that activates large-scale mail balloting during states of emergency and loosened restrictions on turning in ballots for other people.

The changes underlie a major surge in voter registration and participation, but have also fueled suspicions of voter fraud, although officials have not uncovered evidence that it happened on any widespread scale.

Republicans concerned about vulnerabilities in the system are pushing for voter ID laws — which have failed even when Republicans had majorities in the Legislature — and more cross-referencing of databases to clean up voter rolls.

Democratic leaders, however, have expressed interest in making the broad distribution of mail-in ballots standard, even in non-emergency times, because it eases participation.

There are also several proposals seeking to discard the arcane presidential caucus format in favor of a primary.

Among their ideas are bills to prevent landlords from denying applicants on the basis that public assistance programs are their source of income, a measure that would simplify the process of sealing records related to an eviction, and extending the timeline for a $10 million tax credit program approved in 2019 that offers incentives for developing affordable units.

A difficult budget situation has dampened some of their expectations for what’s possible in 2021. Meanwhile, real estate agents who have criticized the ongoing eviction moratorium for the burden it shifts to landlords are poised to be major players in the debate, ranking among the top donors to lawmakers ahead of the session.