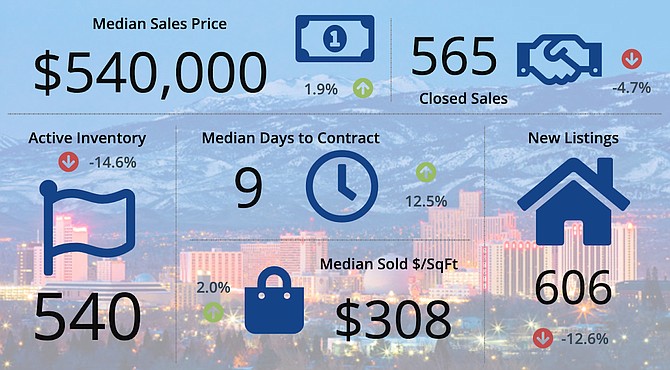 An overview of October real estate stats for the greater Reno-Sparks region, compared to the previous month. Courtesy: Reno/Sparks Association of Realtors


CORRECTION: This story and headline have been updated to correctly report the October 2021 median home price of $540,000 is not a record high for Greater Reno-Sparks. The record of $550,000 was set in May 2021. The NNBW apologizes for the error.


According to historical data compiled by Reno Realtor Guy Johnson on his blog, Reno Realty Blog — his stats are derived from the Northern Nevada Regional Multiple Listing Service — since the start of the century, the Reno-Sparks median price bottomed out at $135,000 in January 2012; comparing that figure to October 2021, it’s a 300 percent increase.

Go to rsar.net/market-monitors for the full October report.