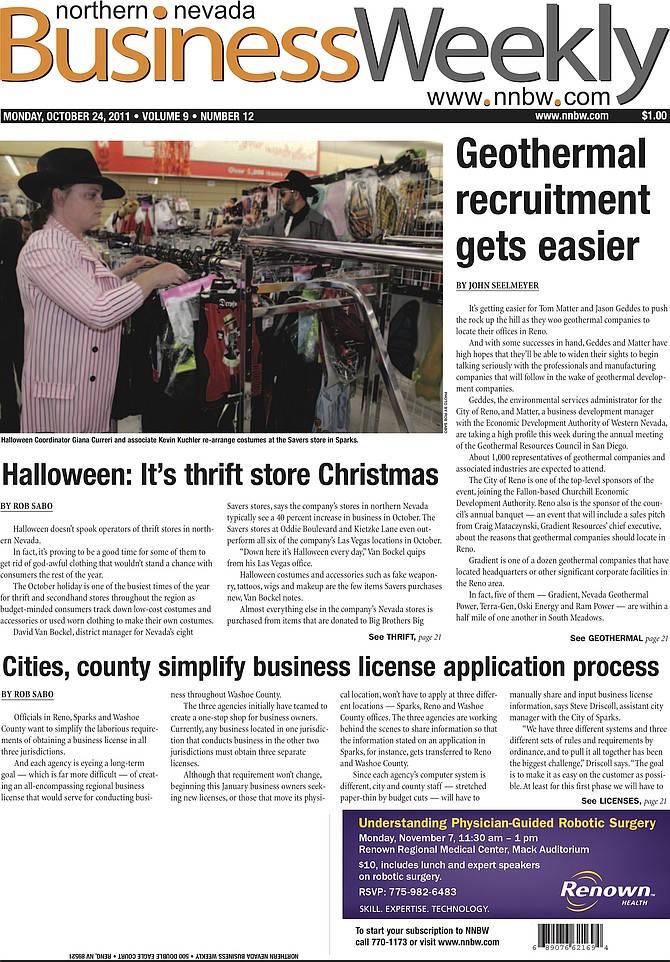 Officials in Reno, Sparks and Washoe County want to simplify the laborious requirements of obtaining a business license in all three jurisdictions. And each agency is eying a long-term goal — which is far more difficult — of creating an all-encompassing regional business license that would serve for conducting business throughout Washoe County.

The agencies initially have teamed to create a one-stop shop for business owners. Currently, any business located in one jurisdiction that conducts business in the other two jurisdictions must obtain three separate licenses.

Although that requirement won’t change, beginning this January business owners seeking new licenses, or those that move their physical locations, won’t have to apply at three different locations. The three agencies are working behind the scenes to share information so that the information stated on an application in Sparks, for instance, gets transferred to Reno and Washoe County.

Halloween doesn’t spook operators of thrift stores in Northern Nevada. In fact, it’s proving to be a good time for some of them to get rid of gaudy clothing that wouldn’t stand a chance with consumers the rest of the year.

The October holiday is one of the busiest times of the year for thrift and secondhand stores throughout the region as budget-minded consumers track down low-cost costumes and accessories or used worn clothing to make their own costumes.

When business is bad for manufacturers, it is probably good for Gordon and Susan Geffert. And when the economic news begins to turn positive, the Gefferts know they are in for a few weeks of tough sledding.

The Gefferts own Reno Custom Crating in Reno. Located near Reno-Tahoe International Airport, the company provides custom-designed wood crates for just about any size object that needs to be shipped outside the region.

“We’ve been through three recessions since we started business in 1992,” Gordon Geffert says. “In the crating business, when the economy really tanks, our business stays fairly steady because people are either shipping artwork or, if they are a manufacturer, they are moving out of town.

“Then, just about the time our economy hits bottom, my business takes a vertical drop. There are two to three weeks I actually call myself to make sure the phones are still working.”