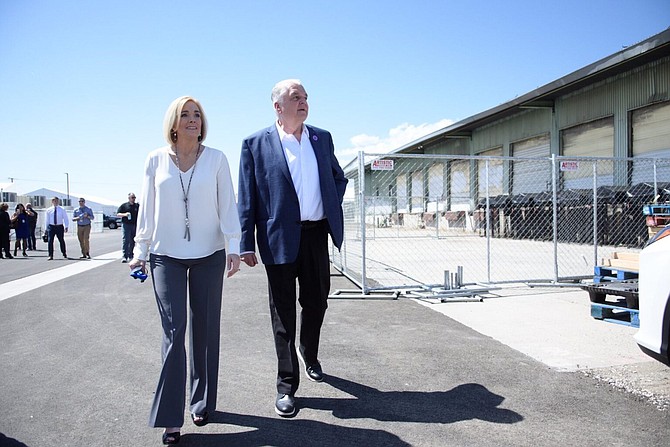 Leaders from Washoe County, the City of Reno and the City of Sparks met Aug. 30 to approve the new arrangement, a decade-in-the-making transition designed to streamline resources and expand services and housing options.

Officials estimate the transition will take about a year and ideally finish by July 2022.

Since 2008, the City of Reno has directed regional efforts to address housing insecurity but needed to receive approval from the county for funding, creating an inefficient process, Reno City Councilwoman Neoma Jardon told The Nevada Independent.

"(The Aug 30) vote aligns resources, expertise and facilities with the needs of our homeless population," Jardon said. "It allows us to fundamentally change and improve the way we help our region's most vulnerable.”

The decision to hand off authority to the county includes a formalized cost-sharing agreement divided in accordance with tax projection percentages among the three local governments.

For annual operating costs projected to be about $15 million, the county will cover a little less than 70% of the costs, Reno will take on around 23% and Sparks will cover about 8%.

Under the agreement, one-time costs for setting up the shelter and other services will amount to an estimated $38 million in 2022, with Washoe County taking on roughly 68% of the price, Reno covering around 21% and Sparks paying for approximately 10%.

Though each of the jurisdictions has committed to providing its share of the funds, none has specified where its part of the funding will come from. Dollars could come from general funds, coronavirus relief aid or other sources of money such as grants, Jardon said.

Based on shelter and housing service records, roughly 1,712 individuals in Washoe County were unhoused as of June of this year.

But officials and housing advocates warn these numbers are likely under-estimates because they do not include the population of people not using services. They also fear the region’s unhoused population will grow as rent prices increase, wildfires threaten housing and evictions take place following the end of the federal eviction moratorium.

To address a need for shelter space that would support safe, social distancing practices during the pandemic and to meet the needs of the expected rise in the region’s unhoused population, the cities of Sparks and Reno, along with the county, built the Nevada Cares Campus, a 46,000-square-foot shelter in Reno with 604 beds and lockers, and set aside land for a temporary campground.

Plans for the shelter included adding space for couples and pets and wraparound services such as healthcare facilities. The change in jurisdiction to the county will maintain operations as they exist, but the county says it plans to hire additional staff to increase support services.

One-time costs outlined in the agreement will go to the planned expansion of the campus with funding also going toward the creation of pet facilities, 50 transitional housing units, case management services, healthcare services, a day center hub offering resources for both unhoused and housing insecure populations and other additions.

The roughly $17.6 million campus was the product of a joint agreement between the three local jurisdictions and was supported by federal coronavirus relief funds. Annual funds will support operating costs at the campus and various shelters, safe camps and other facilities in the region.

Washoe County Commissioner Alexis Hill, who chairs the region’s Community Homelessness Advisory Board, said that the county will focus efforts on transitional housing and offering services to help people on the brink of houselessness.

She added that some of the funding will also go toward hiring housing specialists and setting up supportive services to keep residents housed and help unsheltered populations find permanent housing.

“We want to transition out of the emergency housing game and transition to the permanent housing game,” Hill told The Nevada Independent. “As a region we are moving past the days of trying to treat the symptoms of homelessness and moving towards addressing the root causes.”