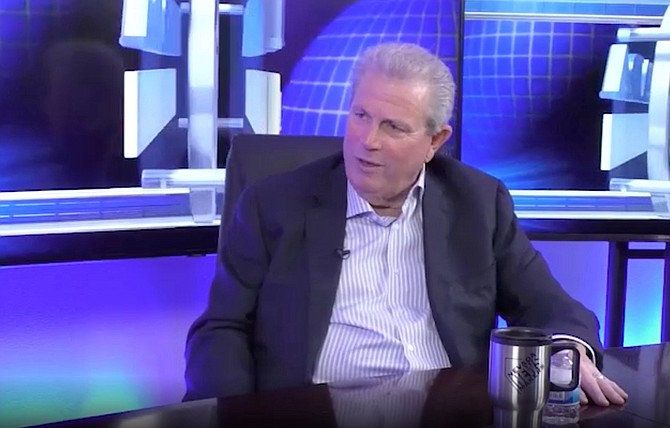 The Tamarack Casino in southwest Reno will add a 128-room Residence Inn by Marriott, Mike Pegram, the principal and co-owner, said on Nevada Newsmakers.

Pegram, renown in horse racing for owing winners of the Kentucky Derby and Preakness Stakes, said he and other part-owners of the Tamarack also are in negotiations to add a similar Marriott property in the Carson Valley. The ownership group currently has the Carson Valley Inn in Minden.

"Currently, we are under plans to put in a Residence Inn, south of the Tamarack, on the property that we've acquired there," Pegram told host Sam Shad. "So there will be a hotel that will be adjoining to the Tamarack, and again, it just comes back to consumer demand."

Marriott has various properties in the Reno and Lake Tahoe area, but a web search found only one other Residence Inn, in Sparks, near the Outlets of Legends Shopping Mall and Legends Bay Casino.

"I think we will be very successful with that brand," Pegram said of Marriott. "Any time you can team with Marriott – as a matter of fact we're in discussions right now to add another (Marriott) product in the Carson Valley. It will be in the 100-room range."

Pegram's group has owned the Tamarack for more than 20 years and the Carson Valley Inn for 12, he said. He did not say when construction would start at either location or when the Marriott next to the Tamarack would open.

The addition of the Residence Inn comes after the Tamarack was completely remolded during the state-mandated shutdown of gaming properties and other businesses in 2020, during the height of the COVID pandemic.

"There's a whole different feel of the Tamarack now, from what it was," Pegram said. "After 20 years, it is time to start mixing things up."

The pandemic also taught Pegram lessons to better run a locals casino in a post-COVID world.

"I think the industry learned a lot because of the social distancing," Pegram said. "As it turned out – and I hate to say this – but we did get a lot of key findings, especially for local gaming."

A key lesson was a better way to arrange the gaming floor, Pegram said.

"For years, you would just cram as many slot machines in as you could, in a row and it was 'slots in the box,’" he said.

"Now, you go into any casino and you look at the slot layout. The customers have much more room. You are not shoulder to shoulder," Pegram said.

"COVID made us a lot smarter," he added.

Renovations and improvement of properties are constants in Pegram's ownership group.

"So we added TJ's Corral. We went in and remodeled (the rooms). We're in our second remodel of rooms. It is unbelievable what we've done over the 12 years," Pegram said. "But again, that is what the consumer demands."

A few years ago, "consumer demand" led to the addition of TJ's Corral at the Carson Valley Inn, Pegram said of the outdoor concert venue that accommodates crowds of about 2,000.

"My hero in business was Ray Kroc," said Pegram, who was a McDonald's franchisee under Kroc in 1975. "He had all sorts of sayings, and one was: 'Be first, be different, be daring.'

"And you always tried to differentiate yourself from the competition," Pegram added. "The reason why TJ's Corral came about was Harrah's and Harvey's (resorts at Lake Tahoe) were doing their outdoor events and we kept hearing from people how expensive things were up there (at Tahoe) and having to drive up the hill."

Pegram felt the population in Carson City and the adjacent Carson Valley was big enough to make an outdoor events center profitable.

"People just didn't realize (the size of) the population base," Pegram said. "We had Bodine's in Carson City, so you had about 100,000 people between Carson City and the (Carson) Valley and we took a chance and we look at it today. It turned out to be a beautiful facility."

Pegram lamented the shift to robotics in some hotels/casinos.

"Robotics and hospitality don't mix. I can't make that connection," he said.

"But you go into any major hotel now and see how the front desk has changed," he continued. "Just over the last 10 years, you know, with the self (help) kiosks. It's no different. Look at a casino cage today and how it was 10 years ago. So automation has come into play. There is no doubt about that but you can never lose that personal touch."

"I told you we're going down this little path with Marriott now," Pegram said. "And I look at their plans and sometimes, I scratch my head and say, 'Well, why are you doing that?'

"They are doing that because Marriott is Marriott and they are the leaders in the hotel industry," Pegram said. "And just look at the way they design their rooms today, compared to designing their rooms 10 years ago. So the consumer demands that.”

The “hospitality” in the hospitality industry is something to never forget, he said.

"My honest opinion as a businessman is that it is the human touch that makes the difference," he said. "I think that, in my opinion, is the difference maker of picking the winners and the losers."