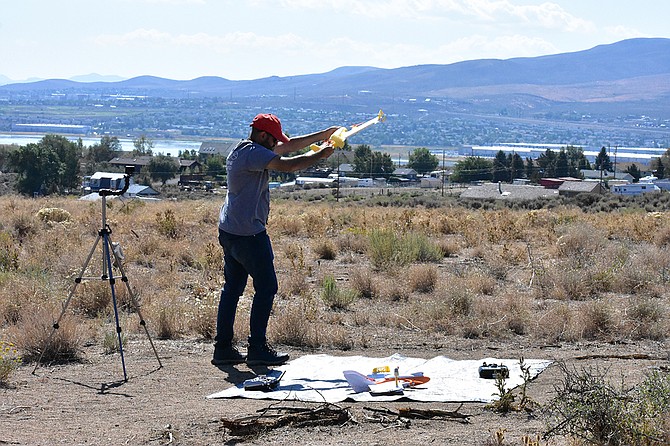 A University of Nevada, Reno researcher tests an unmanned aerial system in Reno.

The University of Nevada, Reno is part of one of four teams selected for NASA’s University Leadership Initiative (ULI), a program developed to support NASA’s aeronautical research goals. The team brings together university and industry expertise, and includes Sierra Nevada Corporation (SNC) as an industry partner. Researchers with the University’s College of Engineering and SNC will collaborate on the project with the team’s lead institution, University of Illinois, Urbana-Champaign, and additional team members that include Georgia Tech, Massachusetts Institute of Technology, North Carolina A&T State University and Lockheed Martin.

The team’s proposal – designed to support NASA’s Advanced Air Mobility campaign – was bolstered by the FAA selection of the State of Nevada as one of seven states designated as a center for the development of unmanned aerial vehicles and outdoor testing of unmanned autonomous systems.

The Nevada-based efforts are led by principal investigators Petros Voulgaris, chair of the University’s Department of Mechanical Engineering and Victor LaMar Lockhart Professor, and Christos Papachristos, assistant professor in the University’s Department of Computer Science and Engineering. The project further involves Resolute ISR, a Carson City-based manufacturer of the Resolute Eagle, an UAS platform. A key ULI goal is to help students gain experience in robotics and aeronautics research and, as a result of the NASA program designation, Resolute ISR will select four initial University engineering students as interns, with plans to add another four by year’s end. The interns will be trained as UAS or drone pilots, thus helping their resumes to stand out.

“The College of Engineering is committed to the development of an aerospace engineering program and is advancing its accomplished robotics program,” Manos Maragakis, College of Engineering dean, said. “Our selection to ULI will provide our faculty and students with new nationally collaborative opportunities for research and broader education, and I am grateful to our team for this major accomplishment.”

The Nevada Governor’s Office of Economic Development (GOED) helped facilitate development of the project proposal and the involvement of Resolute ISR. Noting the support of GOED and companies such as Resolute ISR and SNC, Voulgaris said, “The project itself will be a great showcase to inspire students to work in this area of autonomous flying vehicles and robotics, and be involved in advanced testing.”

The expertise of engineering faculty in advanced autonomous systems and robotics was showcased through the 2021 win by a University of Nevada, Reno team – which included Papachristos and SNC – of the DARPA Subterranean Challenge, a prestigious, three-year advanced robotics competition by the Defense Advanced Research Projects Agency which develops emerging technologies for the U.S. Department of Defense. Launched with the support of Nevada’s Knowledge Fund through GOED, the University of Nevada, Reno team developed a system of walking and flying robots equipped with multi-modal systems that enabled robust and reliable exploration in complex and rough underground settings.

SNC will bring further expertise to the University Leadership Initiative project, particularly by providing the team access to an applicable real-world scenario and simulation model for manned and unmanned airborne systems. This simulation environment will leverage SNC’s fielded enhanced vision system for assisting helicopter pilots to develop high-fidelity sensor input, model dynamics, and environments. This simulation capability will allow the team’s algorithms to be developed and tested in real-world scenarios and provide a pathway to putting the final capabilities to use on real systems beyond the laboratory.