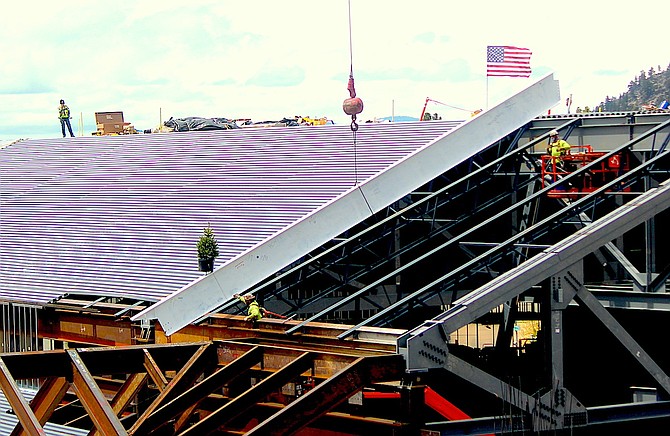 Workers lower a beam with signatures of well-wishers into place on the Stateline Events Center on May 6.

A microtransit system to serve Stateline is one of the requirements under the approval of the events center wrapping up construction in the casino corridor.

Douglas County commissioners heard a presentation on funding the system on Monday.

Microtransit is required to be operational by summer 2023 but will be piloted in summer 2022. In the beginning, it will mostly service the city of South Lake Tahoe but the line will also service portions of the Lake Tahoe region of Douglas County, mainly the casino corridor.

Twenty agencies, including El Dorado County, the city of South Lake Tahoe, the casinos, Edgewood and Heavenly Mountain Resort have contributed $600,000. The proposed microtransit line still needs an additional $600,000 to get started.

The Douglas County is required to spend at least 1 percent of the transient occupancy tax revenue in the Tahoe Township and is also required to fund up to one-half of 1 percent towards the microtransit line.

While commissioners understand the requirement to allocate dollars toward transit, they have not yet agreed on how much to spend.

Monday’s meeting allowed commissioners to ask questions of Lew Feldman, who is helping oversee the event center permit requirements, as well as hear from the public.

Commissioner John Engels said he spoke to residents of Lake Tahoe who said they had no idea this was happening, and he was concerned about the lack of outreach and communication.

Commissioner Wes Rice, who represents Lake Tahoe and is seeking re-election, said since it was part of the permit conditions, it hass been in the public record for quite some time. He also acknowledged the need to have more public workshops before a decision is made.

League to Save Lake Tahoe CEO Darcie Collins said part of the goal of the pilot program is to raise awareness of the new transit options.

More than 20 people spoke, mostly on behalf of businesses and agencies, including Barton Hospital and the Douglas County Sheriff’s Office, all in support of Douglas County providing the full amount of transient occupancy tax towards this program.

However, there were concerns raised about the amount of money being asked of Douglas County being disproportionate to the amount of service within the county. Still most speakers thought it was a step in the right direction and hoped to see expansion of the program in the future.

“It was so nice to be at a commission meeting with so many friendly faces, it doesn’t happen often,” Rice said.