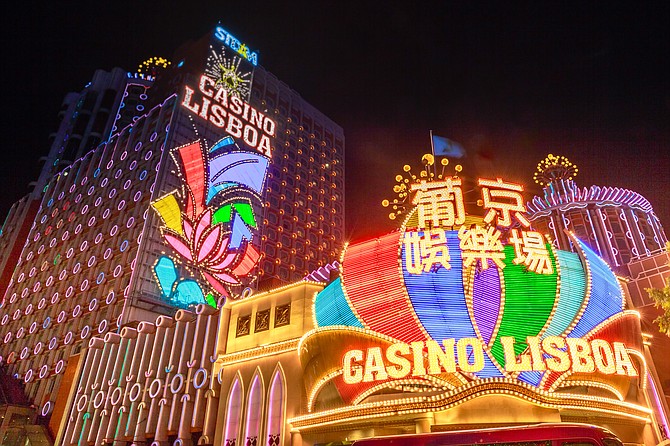 Adobe Stock Casino Lisboa, one of the oldest and most famous casinos in Macau since 1970, in this 2016 photo.

The announcement is positive news for owners who have invested billions of dollars to build the former Portuguese colony near Hong Kong into the biggest global gambling center. But the requirement to spend on theme parks, music and sports adds to financial pressure at a time when revenue has plunged under anti-virus restrictions.

The territory of 700,000 people on a peninsula in the South China Sea is the world's most tourism-dependent economy. It's under pressure from Chinese President Xi Jinping's government to diversify with retailing, entertainment and other industries and to reduce reliance on gamblers from the mainland, its main revenue source.

It gave no details, but TDM Radio Macau reported earlier the winners would be expected to invest a total of $12.5 billion.

Macao's economy has shrunk since anti-virus restrictions that shut down most tourist travel were imposed in 2020.

The Chinese operators include SJM Holdings, part of the empire of the late Stanley Ho, who had a four-decade monopoly on casinos until 2001.

The others are Melco International, run by Ho's son Lawrence, and Galaxy Entertainment Group.

The decision to allow in foreign-owned casinos in 2002 brought a flood of money to Macao. The six license holders operate a total of 41 casinos.

Annual revenue from slot machines, dice tables and other games peaked at $45 billion in 2013, more than triple Las Vegas' level. But it slid after Beijing tightened controls on how often mainland gamblers could visit.

In the latest quarter, the economy shrank by another one-third from last year's depressed level due to anti-virus controls imposed after outbreaks in June, according to the government. It said gambling revenue plunged 72.5% and tourist arrivals shrank 50.8%.

SJM operates a zip line and indoor skydiving attractions. It dropped a proposal for a Hello Kitty theme park. The tycoon behind Galaxy talked about a possible theme park resembling the movie "Avatar," but it never went ahead.