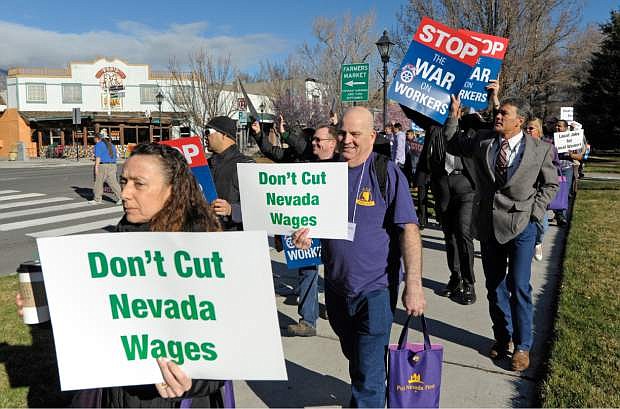 FILE - In this March 12, 2015, file photo, about 100 people rally in front of the Nevada Legislative Building and Capitol in Carson City, Nev. People at the event, organized by the AFL-CIO, were protesting what they say is a constant attack on workers since Republicans took control of the Nevada Legislature. At a rally a week later, a woman yelled to a crowd of union workers in front of the Nevada Capitol, screaming until her voice broke for the governor to &quot;quit attacking us&quot; and rallying attendees to &quot;stand up, fight back!&quot; But Gov. Brian Sandoval didn&#039;t come out, and a bevy of bills to weaken collective bargaining and restructure public employee pensions remain on the agendas--including one scheduled for a hearing Wednesday, March 25, that labor groups call the &quot;Union Armageddon Bill.&quot; (AP Photo/Lisa J. Tolda, File).