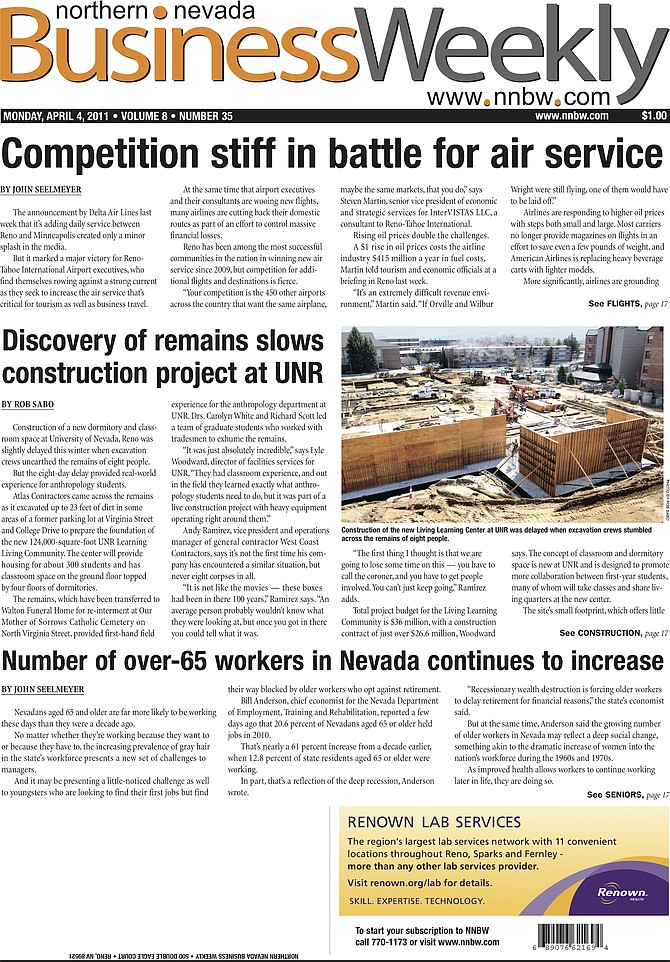 The cover of the April 4, 2011, edition of the Northern Nevada Business Weekly.

The announcement by Delta Air Lines last week that it’s adding daily service between Reno and Minneapolis created only a minor splash in the media.

But it marked a major victory for Reno-Tahoe International Airport executives, who find themselves rowing against a strong current as they seek to increase the air service that’s critical for tourism as well as business travel.

At the same time that airport executives and their consultants are wooing new flights, many airlines are cutting back their domestic routes as part of an effort to control massive financial losses. Reno has been among the most successful communities in the nation in winning new air service since 2009, but competition for additional flights and destinations is fierce.

— Page 1, by John Seelmeyer
Number of over-65 workers in Nevada continues to increase

Nevadans aged 65 and older are far more likely to be working these days than they were a decade ago. No matter whether they’re working because they want to or because they have to, the increasing prevalence of gray hair in the state’s workforce presents a new set of challenges to managers.

And it may be presenting a little-noticed challenge as well to youngsters who are looking to find their first jobs but find their way blocked by older workers who opt against retirement.

Bill Anderson, chief economist for the Nevada Department of Employment, Training and Rehabilitation, reported a few days ago that 20.6 percent of Nevadans aged 65 or older held jobs in 2010 — that’s nearly a 61 percent increase from a decade earlier, when 12.8 percent of state residents aged 65 or older were working.
— Page 1, by John Seelmeyer
Well-funded startup sets sight on diabetics market

Now all it needs to do is buy wisely, integrate effectively and execute well to meet the expectations of Bertram Capital Management LLC, the San Mateo private equity firm that staked Geraty’s Reno-based Sanare LLC.

Sanare’s vision: Creation of a single point where diabetes patients can buy supplies and pharmaceuticals and get the education they need. The company thinks it will be the first into the market.

And the market is growing rapidly, says Geraty. In the U.S., 25 million people are diabetics, and adults today stand a one-in-three chance of becoming diabetic at some point in their life.
— Page 3, by John Seelmeyer