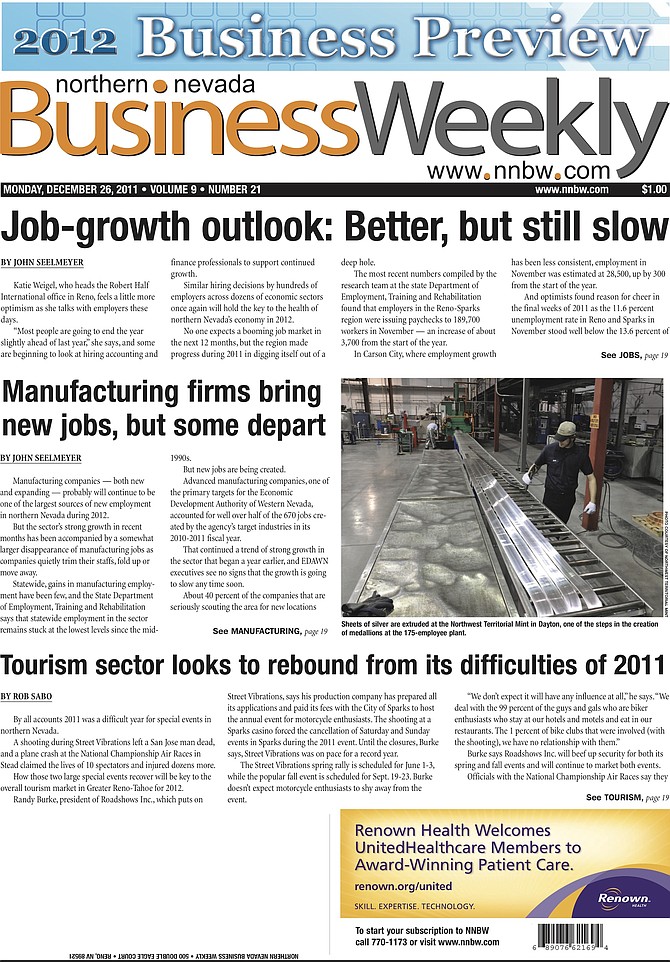 Katie Weigel, who heads Reno’s Robert Half International office, feels a little more optimism as she talks with employers these days.

“Most people are going to end the year slightly ahead of last year,” she says, and some are beginning to look at hiring accounting and finance professionals to support continued growth.

Similar hiring decisions by hundreds of employers across dozens of economic sectors once again will hold the key to the health of Northern Nevada’s economy in 2012. No one expects a booming job market in the next 12 months, but the region made progress in 2011.

The most recent numbers compiled by the Nevada Department of Employment, Training and Rehabilitation found that employers in Reno-Sparks were issuing paychecks to 189,700 workers in November — an increase of 3,700 from the start of the year.

Manufacturing companies — both new and expanding — probably will continue to be one of the largest sources of new employment in Northern Nevada during 2012. But the sector’s strong growth in recent months has been accompanied by a somewhat larger disappearance of jobs as companies quietly trim their staffs, fold up or move away.

Statewide, gains in manufacturing employment have been few, and DETR says employment in the sector remains stuck at the lowest levels since the mid- 1990s.

But new jobs are being created. Advanced manufacturing companies, one of the primary targets for the Economic Development Authority of Western Nevada, accounted for well over half of the 670 jobs created by the agency’s target industries in its 2010-2011 fiscal year.

But they say absorption in top-notch office and industrial spaces throughout the year could lead to a return to speculative development in those market segments.

The majority of regional construction projects in 2012 will be build-to-suit projects for large companies, says Craig Willcut, president and CEO of United Construction, which in 2011 landed two of the biggest build-to-suit jobs in the area: Urban Outfitters’ 462,720-square-foot fulfillment center in Stead and NOW Foods’ 130,000-square-foot distribution facility in Sparks.

“We will see more self-funded projects from top Fortune-500 companies that have the capability to do their own projects,” Willcut says.