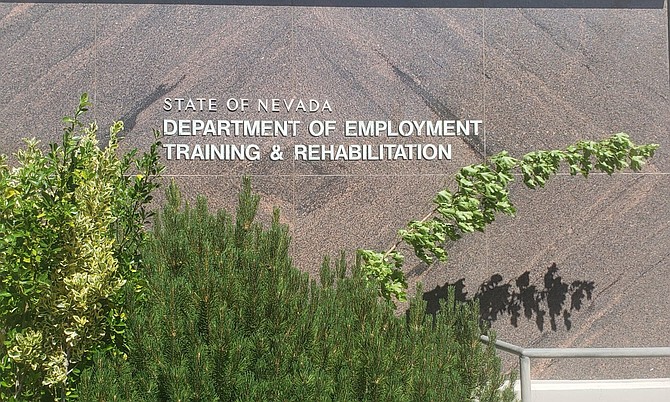 The Department of Employment, Training and Rehabilitation office in Carson City on June 4, 2020.

An independent analysis recommends that Nevada overhaul its unemployment computer system in the next two to three years at a cost that could approach $50 million, far above the cost of the upgrades that are actually proposed in Gov. Steve Sisolak’s budget.

Officials from the Nevada Department of Employment, Training and Rehabilitation (DETR) gave lawmakers more detail on Jan. 26 about a modernization effort mentioned by the governor in his State of the State speech this month that would cost about $3 million.

An outside analysis praised DETR’s system for not entirely breaking down during the rush of applications through the pandemic, as seen in other states, but called for a broad remake.

“The final conclusion, which is probably the understatement of the century, from this report was, ‘we found the system to be inadequate to the situation,’” said Elisa Cafferata, who has been serving as acting DETR director and was named to the job permanently as Jan. 26. “So, yes, we completely agree with that.”

The outside assessment of UINV, the platform that supports regular unemployment benefits (as opposed to Pandemic Unemployment Assistance or PUA for gig workers and the self-employed), found the computer infrastructure is “highly complex” and difficult to change, forcing DETR to create hundreds of workarounds that create inefficiencies and delay the delivery of benefits.

It is also dependent on a variety of third-party products that require continuous, staff-intensive adjustment. And the analysis concluded that while the system is not outright antiquated, it is based on code that is considered “vintage” because it dates to the early 2000s and some elements are no longer supported by the developer.

A total modernization would cost $20 million to $30 million to develop, $10 million to $12.5 million for staffing and contractor costs, and another $3 million to $5 million each year for maintenance, according to high-level estimates provided in the analysis. The upgrade would transition the unemployment program to a cloud-based system over the next 2 ½ to 3 ½ years.

Instead of trying to do those upgrades now, DETR is planning to flesh out the proposal and eventually put the project out to bid. For the upcoming two-year budget cycle, it is seeking a much smaller-scale upgrade — about $1 million a year for hardware and storage upgrades and a half million dollars a year for programming costs.

The estimated $3 million over the biennium will come from a penalties and interest account.

“These investments will really help stabilize the system and speed up the processing time,” Cafferata said.

DETR officials also fielded questions from lawmakers about persistent problems in the unemployment system that often prompt constituents to ask a legislator for help. Cafferata said that since a “strike force” came on board in August to help process claims that were stalled in the backlog, DETR has been able to work through 95 percent of the delayed claims that existed as of August and has reached the stuck claims that were filed in the month of August.

Cafferata said it’s been a long time since she’s seen extremely old claims that have not yet been addressed, such as applications that came in in April or March. She suggested that constituents who are contacting their lawmaker about an unpaid claim from the beginning of the pandemic have likely been denied outright and are not satisfied with that outcome, although she said staff will check on claims that lawmakers forward to DETR.

“There are certainly folks who consistently don’t like the answer that they’re getting, and not everyone meets the eligibility criteria for the program,” she said.

Staff noted that it took time to build out the separate PUA system’s capabilities, leaving some claimants without the ability to appeal a denial of benefits for months.

“We’re currently hiring and have hired additional appeals referees,” said Jeffrey Frischmann of the Employment Security Division. “We’re going through and we’re trying to reduce the number of hearings that need to happen. And we do have a system now that will support the appeals piece of it.”

Cafferata addressed overpayment notices sent out to some claimants demanding that they reimburse the state sometimes thousands of dollars paid out in error. Often the issue emerged when a claimant mistakenly reported their gross income rather than net income; DETR only last month was granted the ability by the federal government to waive overpayments in certain cases within the PUA program.

She said the federal government has still not provided precise guidance on how to waive overpayments, and urged claimants facing such a notice to wait for further information.

Asked how people can reach a live person to get their questions answered in spite of DETR’s often-clogged phone lines, Cafferata noted the DETR is trying to develop materials to post online to help claimants understand the new processes that will take place as a result of the COVID relief bill passed in late December. But she said that having staff answering questions takes them away from other tasks.

“People just need someone to talk to, which is sort of universally true in our program, and every time we move folks answering one set of phones to another place, we’re creating more backlogs,” she said. “So we are always robbing Peter to pay Paul.”