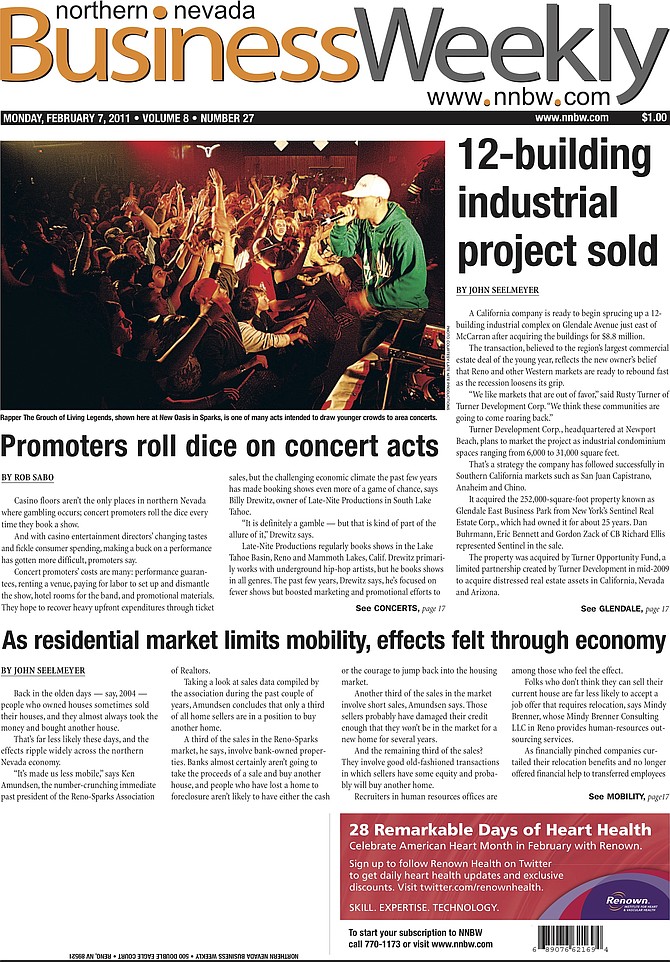 The cover of the Feb. 7, 2011, edition of the Northern Nevada Business Weekly. NNBW File

A California company is ready to begin sprucing up a 12-building industrial complex on Glendale Avenue just east of McCarran after acquiring the buildings for $8.8 million.

The transaction, believed to the region’s largest commercial estate deal of the young year, reflects the new owner’s belief that Reno and other Western markets are ready to rebound fast as the recession loosens its grip.

“We like markets that are out of favor,” said Rusty Turner of Turner Development Corp. “We think these communities are going to come roaring back.”

Casino floors aren’t the only places in Northern Nevada where gambling occurs; concert promoters roll the dice every time they book a show.

And with casino entertainment directors’ changing tastes and fickle consumer spending, making a buck on a performance has gotten more difficult, promoters say.

Concert promoters’ costs are many: performance guarantees, renting a venue, paying for labor to set up and dismantle the show, hotel rooms for the band, and promotional materials.

They hope to recover heavy upfront expenditures through ticket sales, but the challenging economic climate the past few years has made booking shows even more of a game of chance, says Billy Drewitz, owner of Late-Nite Productions in South Lake Tahoe.

“It is definitely a gamble — but that is kind of part of the allure of it,” Drewitz says.

Taking a look at sales data compiled by the Reno-Sparks Association of Realtors during the past couple of years, RSAR Past President Ken Amundsen concludes that only a third of all home sellers are in a position to buy another home.

A third of the sales in the Reno-Sparks market involve bank-owned properties. Banks almost certainly aren’t going to take the proceeds of a sale and buy another house, and people who have lost a home to foreclosure aren’t likely to have either the cash or the courage to jump back into the housing market.

Another third of the sales in the market involve short sales, Amundsen says. Those sellers probably have damaged their credit enough that they won’t be in the market for a new home for several years.

And the remaining third of the sales? They involve good old-fashioned transactions in which sellers have some equity and probably will buy another home.