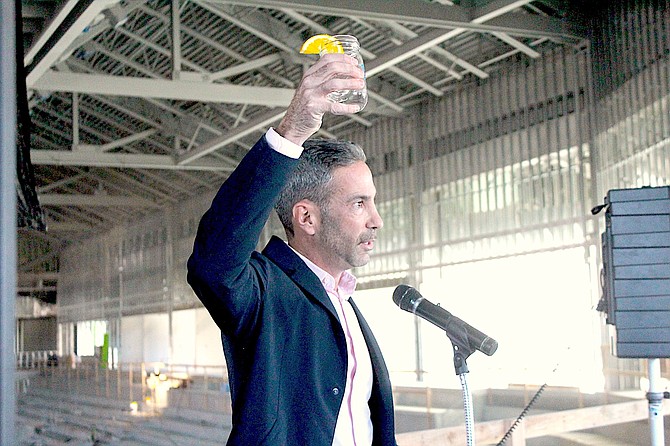 The events center under construction at Stateline will be known as the Tahoe Blue Center after a ceremony Wednesday revealed a partnership with Tahoe Blue Vodka.

As the banner dropped at the event on Wednesday, the billboards outside Hard Rock and Bally’s simultaneously changed to reflect the new name.

“It was around 2012 that the events center vision began to take shape, the same year that Tahoe Blue Vodka was born,” said Lake Tahoe Visitors Authority President/CEO Carol Chaplin. “Since then, the Tahoe Douglas Visitors Authority and its many partners have successfully brought the building to where it stands today and since then, Tahoe Blue Vodka has become a strong brand in the market. The timing couldn’t be more perfect.”

“We are proud and grateful that our very own Tahoe Blue Vodka will be our strong and constant partner in bringing significant impact to our community for years to come,” Chaplin added.

Tahoe Blue Vodka founder and CEO Matt Levitt said he started the company in his garage in 2012.

“This has been 10 years in the making … Tahoe Blue Center was on the list of initiatives intended to modernize and improve the basin and the infrastructure. The purpose of the center is to offer a year round venue for events and conventions that will enhance this iconic destination,” Levitt said. “Our goal as a community is to sup-port sustainable and eco-friendly tourism and leave this place better than we found it. Our goal at Tahoe Blue Center is to lead by example.”

Levitt and attendees of the media event raised a glass of Tahoe Blue Vodka to the banner displaying the new name.

In an interview with the Tribune, Levitt reflected on the success of his business, stating he didn’t take a paycheck for the first four years.

“Then there were another few years of just scraping by, it’s a very difficult industry to break into … the survival rate of start-ups spirits companies is 1percent, I didn’t know that when I started it and it’s a good thing I didn’t,” Levitt said. “So no, I did not envision us getting to this point but in order to take the world on you have to have bottomless reserves of optimism and I think that’s helpful propel our company on, not just me but we have a great team and the team’s mentality is that we know we’re taking on the world.”

As the ceremony happened, work was continuing in the background.

“This is nonstop, they work around the clock to make this happen,” Boryczki said.

The Tahoe Blue Center is slated to open in July 2023. Levitt told the Tribune that he’s excited for any events that meet their sustainability and growth goals to come to the center; he would be very happy to see Green Day or Elton John perform there.