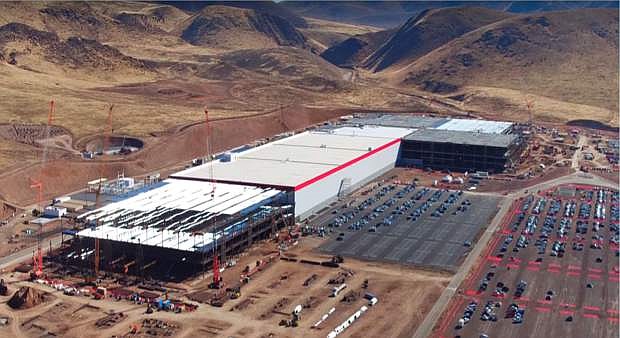 The Tesla Gigafactory in Tahoe Reno Industrial Center is seen under construction in 2016 in this file photo.

Society is poised for a massive change in energy consumption, moving away from fossil fuels to an electric, clean-energy future, some business experts and lawmakers have predicted.

The key to that will be the ability to store power – and use it on demand – with electric batteries, Terry Reynolds, Nevada's director of the Department of Business and Industry, said last week on Nevada Newsmakers.

Electric batteries require lithium. And Nevada is on the verge of becoming the only state in the U.S. that has the infrastructure, technology and business acumen to dig lithium out of the ground, turn it into electric lithium batteries and recycle them for future use, Reynolds said.

"We are going to go to the full cycle of being able to mine, produce and recycle," Reynolds told host Sam Shad. "We're going to have all of those components within our state.

"That's a game changer for Nevada," Reynolds said. "And we'll be the only state in the United States that has that."

Nevada already has the Tesla Gigafactory east of Reno at the Tahoe-Reno Industrial Center, which produces lithium batteries for its electric cars.

Nevada also has large lithium deposits at Thacker Pass in Northern Nevada near Winnemucca and at Rhyolite Ridge in Central Nevada. Mining, however, has yet to begin at either site.

Yet Reynolds pointed to the importance of the American Battery Technology Co.'s Lithium-Ion Battery Recycling Plant, set to open in Fernley during the first quarter of 2023.

The lithium recycling plant has been called a one-of-a-kind venture and is a must-have component for a green and electric society, Reynolds said.

The battery recycling project is huge, with a 100,000 square-foot floor plan – 60,000 square-feet designated for production. The project is valued at $30 million, according to a report in Recycling Today.

"That technology they are going to put into it, to be able to recycle batteries, is going to really revolutionize the industry," Reynolds said. "Because what we are seeing right now is that a lot of states have lithium. But Nevada is in the driver's seat because not only do we have raw lithium that we can produce batteries for, but we also have battery companies. And now, we'll have the ability to recycle batteries within our communities."

Reynolds, whose long career includes city management in Elko and Sparks, stressed recycled lithium is necessary for long-term feasibility of an battery-powered future.

Recycling will also be necessary to maintain the lithium supply. The world's lithium-battery market "is expected to grow by a factor of 5 to 10 in the next decade," according to the U.S. Department of Energy's 2021 National Blueprint for Lithium Batteries.

"I will reiterate about the need to have recycling part of that, so you're not just mining, producing and throwing away," Reynolds said. "You are going to have to be able to recycle, and use the existing materials, so that you are not always going in and mining, mining, mining. So that is going to have to be part of the overall supply chain process that we see within the production of lithium."

"The other part of that is we have to be conscious about environmental controls," he said. "The mining industry has gone through that over the years in terms of basically redeveloping and going in and replanting and working with wildlife and using the proceeds from mining to invest back, environmentally, and not just leave a site and not come back to it."

In a rush for "green energy," Nevada must protect its natural environment, Reynolds said.

Reynolds sees sizeable growth of the lithium-battery production companies at the Tahoe-Reno Industrial Center. Their technology is also getting better, he said.

Another lithium-battery producer may also be building a plant in Nevada, Reynolds said.

"We're working with a company (not named) right now on, basically, building a better lithium battery and they are getting ready to mass produce those batteries. We're working with them to make sure that comes to a reality," Reynolds said. "And they want to be here in Nevada. They want to stay here and build their facilities here, so we're looking at financing options for them. So we know that's coming and we know there is a good future for our state in that area."

During his Nevada Newsmakers interview he discussed:

West Coast Salmon AS, based in Norway, plans to build and operate a large Atlantic salmon farm in Pershing County.

"We have a firm that is looking at putting in a fish farm, all enclosed, about 20 miles south of Winnemucca," Reynolds said. "It's in Pershing County but right on the Humboldt County line.

"They will produce salmon," Reynolds said. "It is going to take about four or five years to produce the first salmon that will go out to market."

The salmon farm will use recycled water. It will be located at the Cosgrave Exit off of Interstate 80, on the northwest side of the Interstate, according to a report by Reno's Channel 2.

"The U.S. market is huge. It is about three or four times larger than any other market in the world and so it makes a lot of sense to have that," Reynolds said. "So they are looking at a fish farm and are looking at getting recycled water, using the waste for agriculture. It will be a perfect fit for Nevada."

Las Vegas needs various kinds of transportation to move tourists around town, plus to and from Harry Reid international Airport, Reynolds said. He is also bullish on underground transportation tunnels that are currently being built by Elon Musk's Boring Co.

The overall plan is for the Boring Co. tunnels to run more than 34 miles with more than 55 stations including Harry Reid International Airport and Allegiant Stadium, according to Las Vegas' FOX5.

Reynolds insists it is a safe system.

"I've actually ridden in the vehicles in the tunnels and looked at the process of how the boring happens," he said. "Our mine-safety teams have been down there to look at what they are doing and make sure they are safe.

"We feel that they are going to really revolutionize transportation within the Las Vegas Valley," he said.

Las Vegas, however, needs a more-layered system – with various ways to move around the city, Reynolds said.

"Now with that said, we are at the rate right now, with the tourism and the need to move people, that we need just about every type of transportation," Reynolds said. "You're going to need different types of transportation below ground, to get them to hotels and convention centers, or to go to a restaurant out in Red Rock, or different areas within the community. So we're seeing a huge demand for transportation.

"We're back over 1.2 million, 1.3 million rides a month with the taxis and we are seeing them come back to having more taxis on the street.

"We are seeing a revolution within the model, of not only just owning the taxis and where the taxis hire the drivers, but also leasing taxis," he said. "That's where multiple drivers lease a taxi and use it. So that vehicles is out, basically 24/7 because they have different leased owners who take it for different shifts in the valley. So it is revolutionizing how we think about transportation."

Tesla delivered its first fleet of all-electric semi trucks to PepsiCo at the beginning of December.

"It was seven or eight years ago when Tesla and Elon Musk announced that they were going to build these electric semis and trucks to be able to haul goods," he said. "And we said, 'Well ... we'll see. Well, it is a reality today, now, and we're seeing the development of electric batteries and power units that go with it to be able to extend the range for a long period of time, up to 500 miles."

The 5G, or “fifth generation” mobile network, will be necessary for any city that wants self-driving cars and trucks, Reynolds said

"So the communities that have that (5G), are going to be the first ones to have the technology to keep in communication with those vehicles."

5G will revolutionize getting around town, he said.

"That (having 5G) means they can deploy a vehicle to you, on an app, immediately," Reynolds said. "Therefore, they can pick up product or deliver a group of people from point A to point B, not from standard locations but from, 'I'm here and I need a vehicle to pick me up and get me over to this point.' So 5G, I think, is very, very important to see that happen."