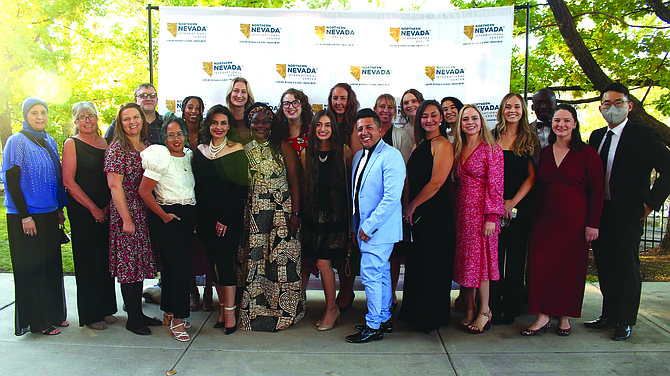 Kayla Anderson Special to the NNBW

Feb. 10 was a big day in Northern Nevada, as Gov. Steve Sisolak announced he was lifting the mask mandate. Meanwhile, the Northern Nevada International Center shared its achievements and highlights from the past year, as well as some of its focus for 2022.
As a program of University of Nevada, Reno, the NNIC helps foster a better understanding between people by promoting diverse cultures and providing resources for residents, international businesses, and newly transplanted immigrants. Since its inception, the nonprofit has been on the ground floor of response efforts in Northern Nevada for several global situations and the organization has done an impressive number of things in the community, especially since the pandemic.

Program Manager Stacy Kinion then shared some highlights of the work that the NNIC has done over the past year, such as hosting 189 international visitors in the Reno/Sparks area and resettling 134 Afghanistan refugees, asylees, and victims of trafficking. More than two hundred volunteers helped with the resettling effort. The NNIC also initiated a few new mentoring programs such as Gateways 4 Growth that help immigrants integrate into the local workforce.

“The Gateways 4 Growth data shows that immigrants remain a vibrant source of culture and interpretation in Nevada,” Kinion said.

In the past year, NNIC also had 1,264 clients at the Language Bank, 883 of who they communicated through phone calls and video chats, 274 in-person interpretation appointments, and helped 108 people with document translations.

“Being able to communicate to integrate into the community is a big part of what we do,” Kinion said.

This year, the NNIC hopes to expand on its news programs and Black encourages local organizations to think about how they can get involved. Its programs include:
Kinion said they are pursuing partnerships with local entities to bring back the J1 visa program, too.

“HOPES is an amazing partner. (Feb. 9) we had a walk-in from Haiti… HOPES housed her, and I think she would’ve been out on the streets without them,” Black said. “We are all about taking care of people, and HOPES is a big part of that.”

With the OB/GYN doctor on the call, Black said the NNIC has helped resettle 120 or so refugees in the last few months, including six or seven pregnant women. It established a relationship with the Carson City public health department but is open to collaborating with other local medical providers as well. NNIC has supported refugee and resettlement efforts for several years, but the recent Afghanistan situation combined with the COVID pandemic posed additional issues.

When asked how the housing shortage affects NNIC’s efforts, Black said, “Housing has been one of our huge challenges. In the beginning of the evacuation efforts, we received a ton of support from the community.”

She said they focused on Afghan women and pairing them with loving families since it’s unusual for young Afghan women to be out on their own. Last fall, the NNIC was trying to secure housing for about five people per week; fortunately, its partnerships with Airbnb, hotels in downtown Reno, and local Catholic churches helped.

“Since November/December most people have obtained permanent housing, but we are looking for long-term solutions,” Black said.

For instance, the NNIC is looking closely at certain apartment complexes for its clients and already works with apartment managers to help immigrants establish credit to help them get their feet off the ground.

“A lot have no credit history and are just getting into the workforce,” she said.

When asked about the NNIC’s biggest challenges, Black said, “I think it’s the volatility of things outside of our control. The (Afghanistan) evacuation was unplanned and more disorganized than we had hoped for.

“We’ve been doing this for five years, helping resettle people from Syria, the Congo, South Sudan, Turkey, and victims of trafficking who mainly come from South America. There are 24 million refugees lingering in camps around the world, and a lot of their visa paperwork has since expired.

“I would say that the biggest challenge is not knowing what’s going to happen next week and keeping people happy and engaged during this time.”

Since 2016, the NNIC has successfully resettled 223 people in Reno and at least one adult in each family has a job. Despite Taliban takeover of Afghanistan last year, the NNIC also received more than $2.7 million in new federal grants, $33,000 of in-kind donations, and it registered 118 new community volunteers. The NNIC also hired 13 new employees and welcomed two new board members.

For information about the NNIC or how to get involved, visit https://www.unr.edu/nnic.