Industrial park under development at TRIC 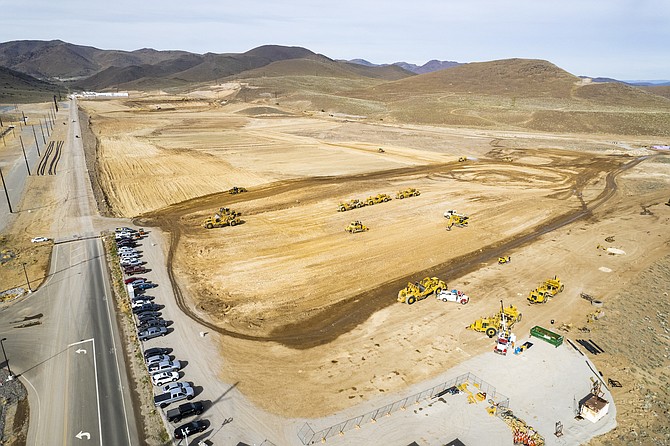 An industrial park under development within Tahoe Reno Industrial Center could add as much as 9 million square feet of new Class A inventory in a part of TRIC already preferred by several of the world’s leading technology companies.

Comstock Tric Associates LLC purchased the land for Comstock Commerce Center back in 2014, said Joel Grace, chief executive officer of Locus Development Group, which is working on behalf of the ownership to execute the development plan for C3. The company has spent the past few years working on civil engineering and site plans for the industrial buildings to be constructed at the more than 600-acre site.

“When we first bought property, it was in the path of progress but very much a greenfield site,” Grace told NNBW in a recent interview. “But we had Google just to our south, Tesla just to the northeast, and we are surrounded by Blockchains’ land holdings. Those are great neighbors to have.”

Redwood Materials joined the neighborhood when it constructed its battery materials recycling facility on 100 acres at TRIC, and the Carson City-based company purchased another 73 acres from Locus to expand its battery recycling operations. Construction on the first building at C3 is underway – it’s a 676,000-square-foot building that Redwood has already leased for its storage and distribution operations.

“The grading work out there, and the topography of all the land is different from what you find in most areas,” Grace said. “We went through some feasibility studies to figure out how to grade it effectively and still meet the demand of current users in the market with the size ranges, depths, column spacing, and clear heights that work best – all the things you do for a normal industrial development.

“There is a lot of flexibility, but ultimately we will be delivering about nine million square feet of leasable space at full buildout,” he added.

Grace said the challenging topography at C3 requires a delicate balancing act between building size and grading costs – flat terrain is limited at the site and must be constructed by cut and fill operations. Moving more dirt means higher costs and could impact potential rental rates, he said.

“We are trying to keep costs reasonable so we can offer reasonable market rental rates to these distribution and manufacturing facilities,” Grace said. “When you are dealing with a property of this size, the dirt quantities get large, and the dollars get larger. You have to understand how that is going to affect the overall development.

“It is a constant civil engineering iteration to get to the ultimate site plan,” he added. “We are still working to understand which building sizes work best for the site and also meet user demand.”

Kimley-Horn: Planning and Design Engineering Consultants is the civil engineer, and Tectonics is the architect at C3. The industrial team at Kidder Matthews is the broker of record and already has fielded a number of requests for proposals for the 815,000-square-foot speculative building even though the warehouse is still coming out of the ground.

With the majority of new Class A industrial buildings being leased before they are finished, Grace said Locus’ goal is to stay slightly ahead of user demand.

“Right now, activity is extreme,” he said. “Companies that need larger building formats are looking 12 to 18 months out because moving a business of that size takes a lot of coordination and time. Our goal is to continue building as long as the demand is there, and we are going to continue to try to stay one building ahead of demand.

“Our investment group is very hands-on and is very invested in Northern Nevada as a whole,” Grace added. “They love the area, they believe in it, and it is where they chose to spend their investment capital.”

Overall industrial vacancy ticked upward ever so slightly in the third quarter to crack 1 percent after two extremely heated quarters and sub-1 percent vacancy to start the year, the industrial team at Colliers reports. However, rents continued to rise, and in some Northern Nevada submarkets annual rental escalations are among the highest in the nation.