‘This is a big investment’: Work to start this spring on $469 million in upgrades to both of Renown’s hospitals 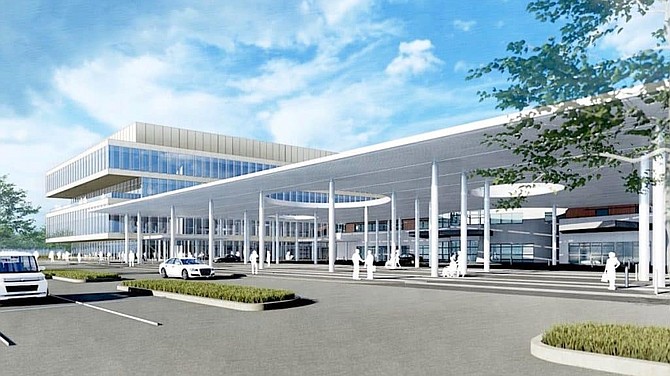 Renown Health’s $469 million investment in improvements to its Mill Street and South Meadows campuses better positions the organization to meet the growing needs of the Reno-Sparks and surrounding communities, a longtime Renown healthcare executive said.

Dawn Ahner, Renown’s chief operating officer of acute services, told the NNBW in a teleconference interview that the organization has seen a steady spike in demand for care prior to COVID-19; as such, the planned upgrades and additions announced in November will allow Renown to meet the needs of the expanding community.

“This community has been growing quickly, and we have been busy,” said Ahner, who has been with Renown for 28 years. “There’s been a large demand for services over the past few years. This is a big investment in this community. This plan allows us to take care to the next level and is one of the single-largest investments in healthcare facilities in the state.”

The sweeping upgrades include infrastructure, capacity and technology improvements to both towers at the main 808-bed Renown Regional Medical Center campus east of downtown Reno, as well as the 138-bed Renown South Meadows Medical Center.

Renown Children’s Hospital
When the organization opened the 515,000-square-foot Tahoe tower in 2008 at the Renown Regional location, it left two floors vacant. The currently vacant fifth floor will house an expanded neonatal intensive care unit that increases capacity to 49 bassinets, as well as an expanded pediatric ICU that increases capacity to 16 private patient and family rooms.

Tahoe tower upgrades
The vacant ninth floor of the Tahoe tower will be transformed into a new surgical trauma intensive care unit that increases capacity to 34 private patient rooms.

Additional work throughout the tower includes:


“It’s been (almost) 15 years since that tower opened, so it’s time to go back through and make some of those upgrades,” Ahner said.

Sierra tower upgrades
Renown Regional’s Sierra tower opened in 1973 when the organization was known as Washoe Medical Center. There will be upgrades and improvements for the first-floor ICU and adult transitional care unit/surgical unit on the fourth floor.

Some of the most-needed upgrades, however, will be to the tower’s back-end functions such as materials management, kitchen and central utilities plant, Ahner said.

“We have done a lot of work in Sierra over the years, but it’s time to go back in and improve our critical care unit on the first floor,” Ahner said. “The important upgrades to our back-end systems are not as exciting, but they are very important. They are crucial to running an efficient campus.”

One of the primary challenges ahead, Ahner said, involves scheduling. Coordinating all the work without disrupting care is akin to conducting a symphony, she said.

“We are working really closely with our architectural teams to make sure we are aligning things the best we can to make sure there’s not any disruptions with the patients we are taking care of,” she said.

Work will begin in June and will be phased in as it is completed. Construction is starting with the vacant floors on the Tahoe tower since disruption to services is minimal.

“It’s a very delicate balancing act,” Ahner said. “We rely heavily on our construction teams and architects to create the least amount of disruption and open new services as soon as we can.”

Despite the sweeping upgrades and expansions, some specialty care services still will be better served by out-of-town partners, such as Stanford Health Care, Ahner added.

“There are high-end levels of care that wouldn’t make sense to provide in a community of this size,” she said. “We have advanced our partnerships to handle those situations. But we really want to make sure where we can that we keep kids and their families here for their care.”

Renown South Meadows
The South Meadows campus opened in February 2004, so after more than 15 years, it’s time to not only improve existing facilities, but expand service offerings to meet the needs of the burgeoning South Reno communities, Ahner said.

The South Meadows campus will get a new ambulatory center adjacent to the existing surgery center, the only new vertical construction in the organization’s master plan. Renown also will add more private rooms, bringing the total to 73 private rooms when work is done.

Other upgrades at the South Meadows campus include:


“It’s time to go back in and do some upgrades,” Ahner said. “We also are doing a fair amount of work in the patient rooms to create a nice space for patients on that campus.

“Our goal is to be a full-service community hospital to serve the South Meadows,” she added. “The new specialty care center provides important services such as surgery services, expanded outpatient therapies, laboratories and diagnostic, and space for different medical group practices to serve that growing community.”

Perkins + Will of Chicago is the lead architect on the project, while WSP of Montreal is the lead engineering firm. Datum of San Antonio is the lead structural engineer.

Jim DeVolld, Renown’s board chairman, said in a statement the organization’s massive investment improves the hospital’s ability to provide patient care for the next few decades.

“Renown is making this investment to transform care in our community and improve the quality of life for generations to come,” DeVolld said. “Nothing of its kind currently exists in our area. This will improve care and have a tremendous, positive effect on our local and statewide economy.”

According to Renown, with work slated to begin this spring, “a majority” of the full project should be completed by fall 2023.