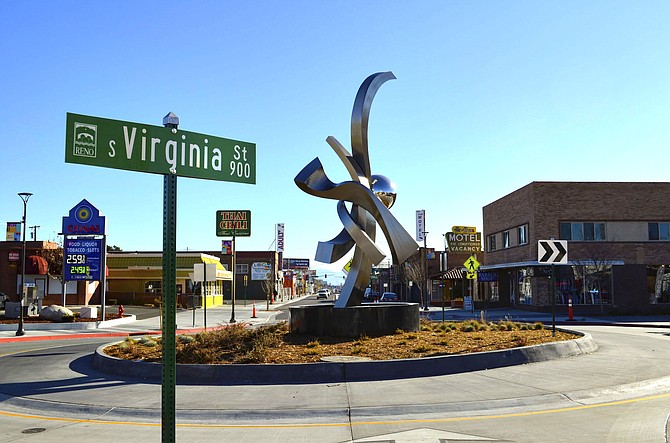 The Virginia Street Project included construction of a roundabout at Marr and Center streets in Midtown. Inside the roundabout is a large-scale steel sculpture, titled Reciprocity, which was done by artist Hunter Brown and installed by the city of Reno. Photo: RTC of Washoe County

It was summer 2020 and Sprague, owner of Micano Home and Garden in Reno’s Midtown district, was looking at his storefront for the first time in two years without orange cones and construction barricades planted nearby.

“The biggest dream I ever had came true when I came around that corner and saw my store,” said Sprague, whose voice catches as he recalls that moment last summer. “I was like, oh my gosh, I’m going to make it now. Instead of being, ‘look what I’m left with, I’m going to have to try so hard to get people to come into my store.’”

Sprague was looking at the culmination of the competition of the Regional Transportation Commission (RTC) of Washoe County’s Virginia Street Project, which broke ground two years earlier, in September 2018.

RTC accelerated construction of the $87 million project last March when most Midtown businesses closed due to the coronavirus pandemic.

Thanks to Sierra Nevada Construction’s expedited efforts, Reno’s main thoroughfare reopened to two-way traffic through Midtown in mid-August, three months ahead of schedule, with new crosswalks and roundabouts, center medians, and wider sidewalks, among other upgrades.

“It’s like a whole new world — what we had always dreamed of Reno being like,” Sprague said. “Having wider sidewalks and a cleaner atmosphere to walk in and feel safe, I’m having a lot more hope than I ever felt when I had three feet (wide) of sidewalk.

That influx of people is apparently paying dividends. Micano Home and Garden, which specializes in handcrafted decor and art from recycled items, is on a six-month stretch of record sales, said Sprague, who opened his shop in 2003.

“Business is up at least 35%, which is pretty big,” he continued. “Even though this is a tough time for all, it’s our time to take advantage of what RTC did for the street.”

CLEARING HURDLES
Getting to this point was not easy for most businesses. Prior to the project’s completion, many Midtown retailers struggled to lure customers through their doors amid the construction.

Just ask Kayla Sisson, co-owner of JoStella Coffee Co., which opened on the corner of South Virginia and St. Lawrence Avenue just one year before SNC construction crews began working down the corridor.

“It was really hard because people didn’t want to come here because it was just orange cones and one-way streets and it was really intimidating for customers,” Sisson told the NNBW. “It was hard to have a new business in the midst of that, and it went on for years.”

Since the streets reopened and cones cleared last summer, though, JoStella Coffee has seen more foot traffic than ever, Sisson said.

“It’s kind of a destination now, where people come to Midtown, they walk around, grab coffee, they go to the shops, so it’s been really great,” said Sisson, noting JoStella Coffee’s sales are up 100% compared to January 2019. “The wide sidewalks really help. And just the fact that it’s an open new road and accessible, that’s all we ask for.”

Next, Sisson said, like many business owners, she’s just hoping to get back to normal capacity sooner than later.

“We’re optimistic, because we’ve overcome so many hurdles as it is,” said Sisson, who owns JoStella Coffee with her mother, Tammy. “We’re just hopeful for a smooth year.”

Craig Parish, president of Midtown District Reno and a pastor at Living Stones Church in Downtown Reno, said hope and optimism is what a lot of Midtown businesses are feeling now that the two years of construction has wrapped up.

“A lot of them have been forced to be creative and adapt (due to the pandemic), but Midtown has a lot of resiliency and grit and that entrepreneurial spirit, so I think some of them are doing well,” Parish said. “People are waiting to thrive and a lot of them are trying to figure out how to do that now.”

The biggest benefit of the completed construction, Parish said, is the improved walkability and safety along the corridor.

“Before, some of our sidewalks were 12 to 16 inches, and now they’re 6 feet, if not wider,” Parish said. “It just makes it much more of a walkable place — you can walk the whole street. During the pandemic, there is plenty of room to distance if somebody is on the sidewalk with you.”

UNR CONNECTION
While much of the attention on the Virginia Street Project — which is funded with fuel tax revenue, sales tax revenue and federal funds — has for months focused on the burgeoning Midtown district, the other main segment of work recently wrapped near the University of Nevada, Reno, nearly a year after it began on March 6, 2020.

According to a Dec. 28 press release from the RTC, highlights of the UNR section include:


David Smith, owner of Rick’s Pizza, Beer & More, set on the corner of College Drive and North Virginia Street, said his business was not impacted by construction near the university.

“With the school being out (for spring break), and then the pandemic, I think they did it (the construction) at the right time,” he told the NNBW.

He added that RTC’s move to convert the roadway from two lanes of traffic in each direction will likely prove to be a positive for businesses and the corridor as a whole.

“It looks really nice, and overall, I think it will benefit the university and the buses that run around here, and traffic flow,” he said, though he noted the corridor won’t see full impacts of the revamped roadway until Wolf Pack sporting events return. “Especially on game days, when they’re running buses more, the traffic will be backed up pretty bad for awhile.

“We haven’t noticed how it’s going to work exactly because the stadiums aren’t filling up with people. But, in time I think it’ll definitely benefit the flow of traffic a little better during those times.”

COMPANY COLLABORATION
In addition to Sierra Nevada Construction serving as lead contractor for the nearly $90 million project, Atkins served as construction manager and environmental consultant, while NCE and CA Group, Inc. served as design consultants, according to RTC Washoe.