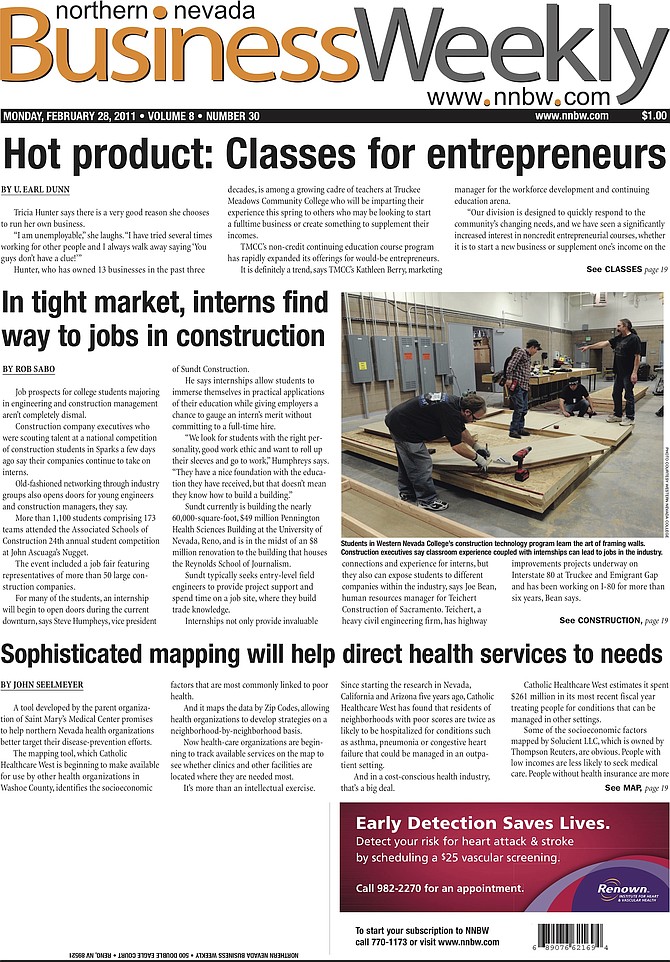 The cover of the Feb. 28, 2011, edition of the Northern Nevada Business Weekly. NNBW File


EDITOR’S NOTE: Each week in 2021, we will feature snippets of stories that published a decade ago to provide readers a 10-year perspective of business news in the region. This week’s stories first published in the Feb. 28, 2011, edition of the NNBW.

Tricia Hunter says there is a very good reason she chooses to run her own business.

“I am unemployable,” she laughs. “I have tried several times working for other people and I always walk away saying ‘You guys don’t have a clue!’”

Hunter, who has owned 13 businesses in the past three decades, is among a growing cadre of teachers at Truckee Meadows Community College who will be imparting their experience this spring to others who may be looking to start a full-time business or create something to supplement their incomes.

— Page 1, by U. Earl Dunn
Allied Washoe positions itself for a new era in fueling

Allied Washoe Petroleum was in the fuels business before the world ran on oil. And now that the world is looking to run on something other than oil in its future, the Reno-based company is beginning yet another transition.

Allied Washoe plans, for instance, to add a charging station for electric vehicles at its headquarters at 2500 E. 4th St.

Meanwhile, a few weeks ago, the company began collecting used cooking oil, which is recycled by Minden’s Bently Biofuels into diesel fuels. Allied Washoe puts some of that environmentally friendly fuel to work as it blends 2 percent biodiesel with the regular No. 2 heating oil that it delivers to some 2,500 home heating customers in the region.

Mike Cox, CEO of the century-old company, believes the fuels business clearly is set for sweeping changes over the next couple of decades.

A new wellness center planned to open in April by YMCA of the Sierra promises to jump-start redevelopment of the mostly vacant, 14,000-square-foot former JCPenney building at 100 N. Sierra St. in downtown Reno.

“We’re such believers in that corner. It has the characteristics of being a hub for downtown,” says Todd Christman, managing director of Union Property Capital, the San Francisco company that owns the building. “There’s going to be a flood of people in and out of that building every day.”

That pedestrian traffic, he said, will help Union Property Capital redevelop the ground floor of the building into retail uses.