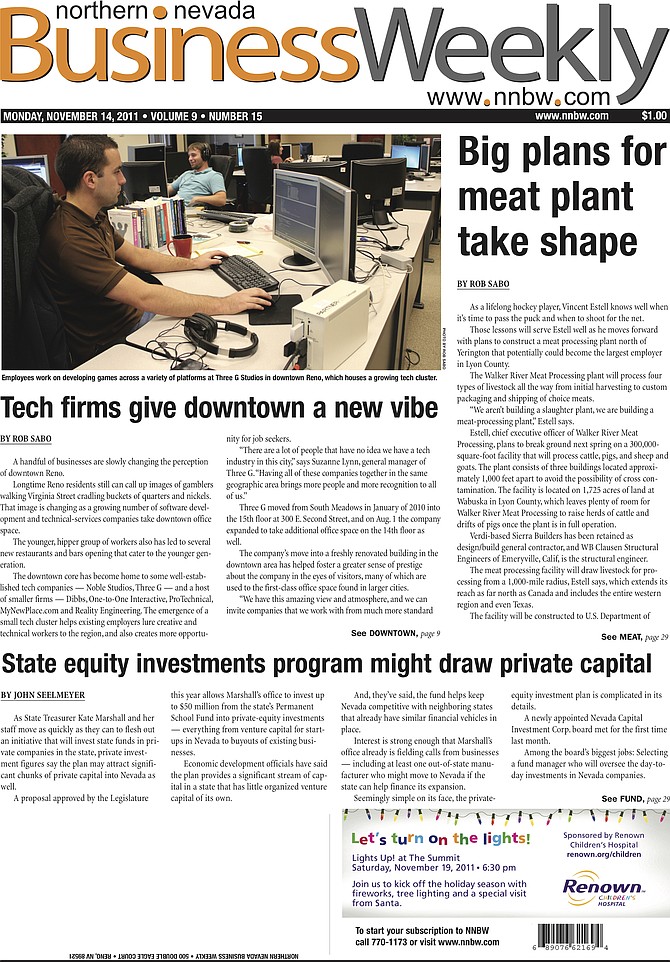 As a lifelong hockey player, Vincent Estell knows well when it’s time to pass the puck and when to shoot for the net.

Those lessons will serve Estell well as he moves forward with plans to construct a meat processing plant north of Yerington that potentially could become the largest employer in Lyon County. The Walker River Meat Processing plant will process four types of livestock all the way from initial harvesting to custom packaging and shipping of choice meats.

“We aren’t building a slaughter plant, we are building a meat-processing plant,” Estell says. Estell, chief executive officer of Walker River Meat Processing, plans to break ground next spring on a 300,000- square-foot facility that will process cattle, pigs, and sheep and goats.

A handful of businesses are slowly changing the perception of downtown Reno. Longtime Reno residents still can call up images of gamblers walking Virginia Street cradling buckets of quarters and nickels.

That image is changing as a growing number of software development and technical-services companies take downtown office space. The younger, hipper group of workers also has led to several new restaurants and bars opening that cater to the younger generation.

The emergence of a small tech cluster helps existing employers lure creative and technical workers to the region, and also creates more opportunity for job seekers.

Advanced Refining Concepts LLC of Reno last week began construction on a project to double the capacity of its refinery at Tahoe Reno Industrial Center nine miles east of Sparks.

The company uses a patented process to combine natural gas (or other biogases) with a petroleum base to create liquid fuels for vehicles, aircraft or industrial applications.

The $7.5 million expansion project that began last week will bring production from the refinery to 400,000 gallons of diesel fuel per day.

Peter Gunnerman, co-founder of Advanced Refining Concepts, said the company has sold more than 22 million gallons of the diesel fuel, which it dubs “GDiesel,” since the refinery began operation in 2010.
F&P Construction of Reno is general contractor on the refinery expansion job; the project is expected to be finished in late April.