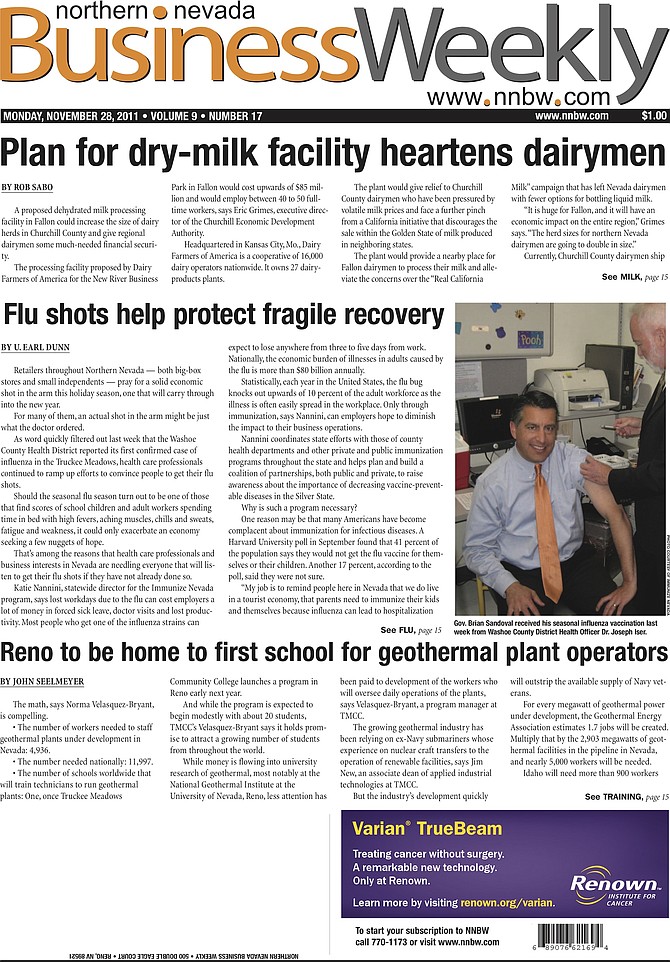 Retailers throughout Northern Nevada — both big-box stores and small independents — pray for a solid economic shot in the arm this holiday season, one that will carry through into the new year. For many, an actual shot in the arm might be just what the doctor ordered.

As word quickly filtered out last week that the Washoe County Health District reported its first confirmed case of influenza in the Truckee Meadows, healthcare professionals continued to ramp up efforts to convince people to get their flu shots.

Should the flu season turn out to be one that finds scores of school children and adult workers spending time in bed with high fevers, aching muscles, fatigue and weakness, it could only exacerbate an economy seeking a few nuggets of hope. That’s among the reasons healthcare professionals and business interests in Nevada are needling everyone who will listen to get their flu shots if they have not already done so.

A proposed dehydrated milk processing facility in Fallon could increase the size of dairy herds in Churchill County and give regional dairymen some much-needed financial security.

The plant proposed by Dairy Farmers of America for the New River Business Park in Fallon would cost $85 million and employ 40-50 workers, says Eric Grimes, executive director of the Churchill Economic Development Authority.

Headquartered in Kansas City, Mo., Dairy Farmers of America is a cooperative of 16,000 dairy operators nationwide.

The Nevada plant would give relief to Churchill County dairymen who have been pressured by volatile milk prices and face a further pinch from a California initiative that discourages the sale within the Golden State of milk produced in neighboring states.

— Page 1, by Rob Sabo
Reno to be home to first school for geothermal plant operators

The math, says Norma Velasquez-Bryant, is compelling. 1. The number of workers needed to staff geothermal plants under development in Nevada: 4,936, 2. The number needed nationally: 11,997, and 3. The number of schools worldwide that will train technicians to run geothermal plants: exactly 1, once Truckee Meadows Community College launches a program in Reno early next year.

And while the program is expected to begin modestly with about 20 students, Velasquez-Bryant says it holds promise to attract a growing number of students from throughout the world.

While money is flowing into university research of geothermal, most notably at the National Geothermal Institute at the University of Nevada, Reno, less attention has been paid to development of the workers who will oversee daily operations of the plants, says Velasquez-Bryant, a program manager at TMCC.